Justin Jackson ran for 210 yards and four touchdowns to power Glenbard North to a 29-23 upset victory over Maine South in a Class 8A quarterfinal on Saturday. 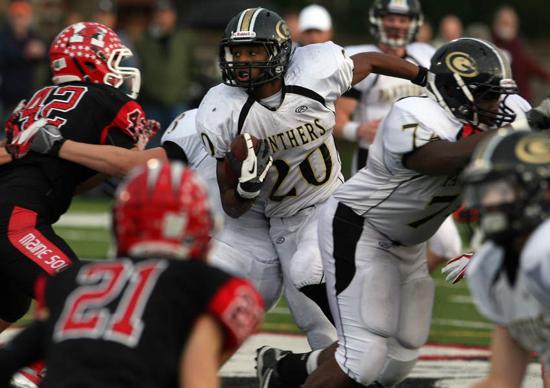 Justin Jackson finally found an opening. The Glenbard North junior running back, who gained a tough 74 yards in the first half, broke a run outside left on the first snap of the second half and took it 88 yards for a score.

“The cornerback dived in and I was surprised,” Jackson said. “That was a big play.”

Jackson had 210 yards and four touchdowns on 36 carries as the No. 8-ranked Panthers went on to knock off No. 3 Maine South in a 29-23 Class 8A quarterfinal victory. Glenbard North will visit Loyola next weekend in a semifinal matchup.

For the second straight season, a Maine South team that was favored to make it to Champaign fell short.

“Hats off to them,” Maine South coach David Inserravsaid. “We gave them too many chances. The seniors have had an incredible career here at Maine South.”

One of those seniors, Northwestern-bound quarterback Matt Alviti opened up the scoring early with a four-yard run with six minutes left in the first quarter. He later scored on a 31-yard run with 7:36 left in the third that cut the lead to 21-16.

But as he had done three times earlier, Jackson found the endzone, this time on a two-yarder with 25 seconds left in the third to make it 29-16.

Murphy’s 11-yard run on third-and-10 with 1:30 left in the game sealed the win for Glenbard North.

The Panthers had three receivers with two catches each, including senior fullback Shawn Lenahan (2-21) who cleared many of the holes for Jackson.