Maine South will have to replace 44 seniors from the 2012 roster. 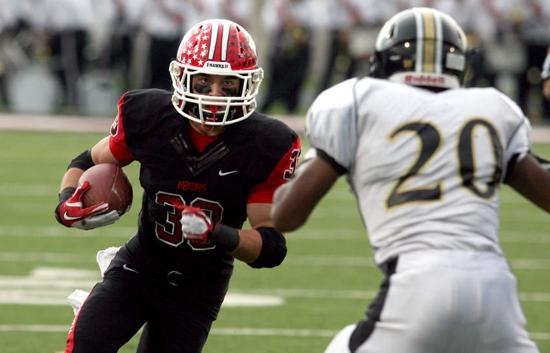 Losing in the Class 8A quarterfinals is not what Maine South had planned after starting the 2012 season ranked first in the state.

However, an 11-1 season should not be considered a disappointment, according to head coach Dave Inserra.

“If you don’t win a championship at Maine South, it seems like a letdown,” Inserra said, mindful that the Hawks own five state titles. “But this was a successful season. They were on the verge of being nationally ranked. In the end, it shows how difficult it is to win a championship.”

Inserra understands that before winning that trophy next season, Maine South will have to replace 44 seniors. Just in sheer numbers and leadership, he said, they’re going to be difficult to duplicate.

“The hardest thing to lose was the leadership and work ethic of the seniors,” Inserra said.

Inserra noted that the biggest gain from having three postseason games is that it allowed for all the non-seniors to receive three extra weeks of reps.

The offense will return junior running back Clay Burdelik. Burdelik, who scored a touchdown in Maine South’s season-ending, 29-23 loss to Glenbard North on Saturday, understands that he plays in a passing-oriented offense, but is planning to put his reps in this offseason to prep for a bigger role.

“I want to gain 15 pounds, work on my straight-line speed and my pass blocking,” Burdelik said. “I think we’ll fill all the positions just fine. This junior class hasn’t been the hardest working, but we know we all need to put in a lot of work this offseason.”

Burdelik also will be returning at safety to lead a defense that should be a strength for the Hawks with six returning starters next season.

“Having two years of experience on defense will help a lot, especially with our reads,” Burdelik said.

On an offense that featured mostly seniors, the biggest loss is quarterback Matt Alviti. The Northwestern recruit was a three-year starter who guided a spread offense that put up an average of 35 points in 12 games this season.

“Matt is a guy who you didn’t even have to coach at the end,” Inserra said. “He knew the offense that well.”

Inserra said the Hawks have a nice problem with three candidates to replace Alviti.

Regardless of who’s throwing the ball, they will count on a running attack anchored by Burdelik, who believes that Maine South can return to Champaign next season.

“Our team chemistry is one of the best in the state,” Burdelik said. “And that’s going to make us tough to beat.”