Waukegan holds on to edge Mundelein

Waukegan built a 17-point lead early in the second half, then held on to defeat host Mundelein 65-63 Friday in the fourth round of the Mundelein/Warren season-opening boys basketball tournament. 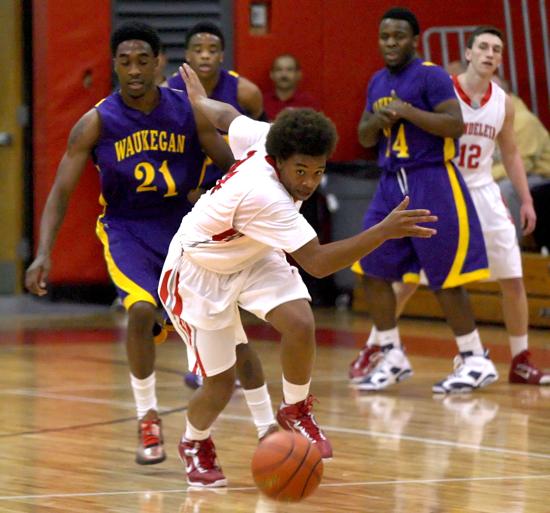 Waukegan built a 17-point lead early in the second half, then held on for dear life, edging host Mundelein 65-63 Friday in Round 4 of the Mundelein/Warren season-opening boys basketball tournament.

That’s when Mundelein’s Sean O’Brien (19 points, eight rebounds) shot two free throws for the tie, but missed the second, leaving the Mustangs behind 62-61.

Waukegan’s Quinton Davis (21 points, seven rebounds) was fouled with four seconds left, and missed both free throws, but his second miss came back to him and he passed to Davis, who hit 1-of-2 from the line with 0.7 left to complete the scoring.

“We weren’t panicked at all. We’re a veteran team. Give credit to Mundelein. They raised their intensity. They were a little more assertive and pointed offensively than we were in the second half,” said winning coach Ron Ashlaw. “We need to make shots and free throws at the end, but this was the best effort we’ve sustained all season.”

On the other side, Mustang coach Richard Knar was pleased with the way his team came back.

“I was disappointed in the first half because I thought we were tentative,” Knar said. “It was the first time we faced fullcourt pressure this season, but there’s no excuse for us to handle it poorly.

“I have no problems with the way we played in the second half. I thought Cliff Dunigan settled us down and some other guys stepped up and hit shots. I was happy with the way they responded with Sean in foul trouble.”

Dunigan had 21 points and eight rebounds. Dylan Delaquila added 14 points. Mundelein was 17-of-27 from the field in the second half, including 7-of-10 from behind the arc.

Devonte Taylor had seven points and 17 boards for Waukegan.