The Jamie Swimmer Show nearly pulled North Shore Country Day from the abyss, but ultimately Perspectives MSA prevailed 53-48 in the final round of the 2012 Warrior Classic on Saturday night. 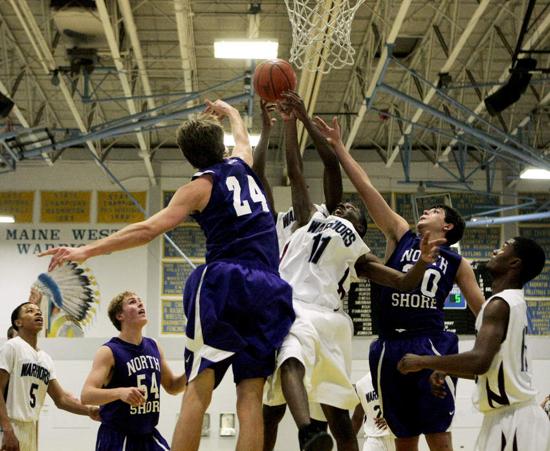 The Jamie Swimmer Show nearly pulled North Shore Country Day from the abyss, but ultimately Perspectives MSA prevailed 53-48 in the final round of the 2012 Warrior Classic on Saturday night.

“Tonight, Jamie, yeah, he relished it,” Coach Rashid Smith said of his point guard, who has had to step up in star forward Austin Curren’s absence. “He did a really nice job of taking advantage of his space on the court. That’s what I expect from him. He’s a good player. He’s ready.”

Still, the Raiders’ comeback from 16 points down, built on Swimmer’s hot shooting and North Shore Country Day’s persistent defense, made an impression.

“At the end, when we made our run in the fourth quarter, it was just because of defense,” Raiders forward Riley Hall said. “We all probably just realized that it was the last game of the tournament. It was the last chance to try and make a name for ourselves at a big tournament like this, and I think everybody just clicked on at the same time.”

All night long, the Raiders were relegated to the outside due to the presence of 6-foot-8 center Terrence Sardin. Swimmer and his teammates were able to have some success driving to the basket, forcing the Warriors into the double bonus early in the fourth quarter. But Sardin was able to limit what Hall could do inside.

The game was fairly close at the half with the Warriors leading 21-18, but they expanded their lead to 11 by the end of the third quarter, behind the fine play of guard Derrick Green. The senior gave Perspectives a four-point lead when he drove into the paint and banked it in. A fantastic rebound and put back, as Green kissed it high off the glass, gave the Warriors a 37-23 lead. A three from the corner pocket gave Perspectives a 42-28 lead, as Green would finish the night with 22 points.

That’s when Swimmer, mostly silent in the second half until then, heated up. He began with two consecutive threes to draw the Raiders within 10. Another Swimmer three, giving the guard 29 points on the night, drew North Shore Country Day within two, but Swimmer missed what was probably his easiest shot of the night, as his lefty scoop layup rolled off the front rim. Riley Hall had another chance to tie it with a spot-up jumper but that drew iron too, allowing the Warriors to come away with the win.

“It just wasn’t falling,” Hall said. “I was mad at myself, less for missing a shot and more for not taking a layup, because I had an opening. I could have gone to the basket. I could have drawn the foul, got an and-one, finished a layup, and I was frustrated with that. Sometimes, the wide open shot is harder to make than the one that’s guarded.”