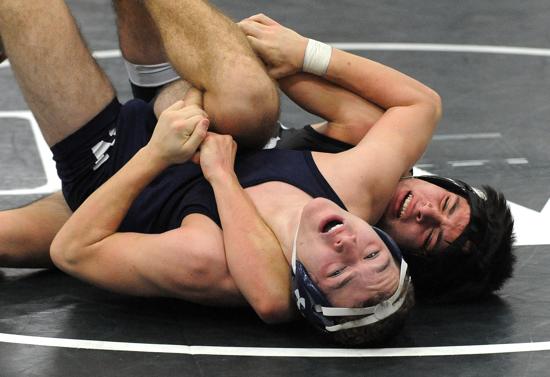 John Tito of Elmwood Park won the 152-pound championship with a 13-7 decision win over Blaine Bilek of Nazareth, which finished fifth with 133 points.

The Tigers saw Austin Tillema win the 106-pound championship with a major decision win of 10-2 over Brian Zarky of Mather, while junior Ben Vazquez, who is 11-0 on the season and ranked fifth in the state by Illinois Matmen, took first place in the 113-pound division with a two technical fall, major decision victory in the final over sophomore Juan Reyes of Guerin.

“I’m happy to finish first, but I still think I can do a lot better out there. I’m not satisfied yet,” said Vazquez.

Nazareth’s Pat Vitek, who has six wins and no defeats this season, captured the 195-pound championship with a victory by fall at 2:10 over Ian Miller of Walther Lutheran.  The Roadrunners also saw Dan DeSimone lose the 220-pound final in a fall at 5:55 against Joe Schudt of De La Salle.

“I’m really happy. We’re small but mighty. We showed a lot of toughness out there today,” said Danan.

St. Joseph, which finished thirteenth out of thirteen teams can take solace in the performance of senior Max Gonzalez, who went 2-2 on the day.

“We’re disappointed, but I think we did some things well today. We only brought five guys today when we usually bring seven. We’ll bounce back,” said Gonzalez.