Laquon Treadwell, who along with Matt Alviti participated in an all-american football game last weekend, will announce on Jan. 17 where he will attend college next season. 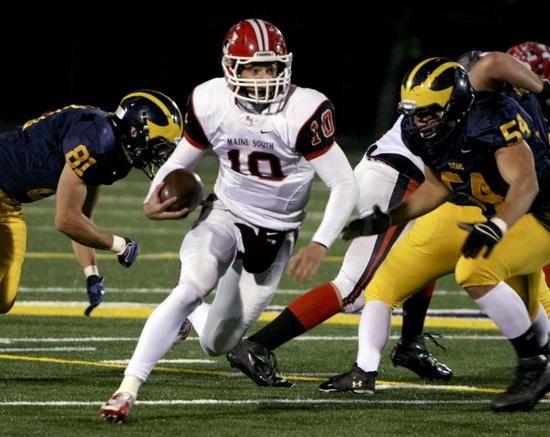 A couple of local players put up good numbers in national all-star football games last Friday. Maine South quarterback Matt Alviti, a Northwestern recruit, completed 10 of 12 passes for 104 yards and one touchdown for the West in a 17-14 loss to the East in the Semper Fidelis All-American Bowl in Carson, Calif. Crete-Monee’s Laquon Treadwell, the nation’s top-ranked receiver in the Class of 2013, caught six passes for 46 yards for Team Nitro in a 16-3 loss to Team Highlight in the Under Armour All-America Game.

The wait is almost over for those wondering where Treadwell will play his college football. The Crete-Monee standout confirmed that he plans to make his college announcement at 5 p.m. on Thursday, Jan. 17. He has one more official visit to take this weekend to Oklahoma State and also is considering Mississippi, Michigan and Oklahoma among others.

All 11 Illinois High School Association by-law changes up for a vote passed in balloting by member schools, the IHSA announced on Tuesday. The most significant revisions tighten up transfer rules. Among them: athletes can’t transfer after a sport season has begun and be eligible immediately; and first-time transfers from private to public schools or from private to private are not automatically eligible. Also, international students are eligible for just one year and must come through an IHSA-approved foreign exchange program.

One of the most anticipated regular-season games of the boys basketball season — the Red-South showdown between neighborhood rivals Simeon and Morgan Park — has been moved to Chicago State University. Tip-off is scheduled for 7 p.m. on Wednesday, Jan. 16.