Lance Whitaker scored 21 points to reach a 1,000 career points scored for Bartlett in the Hawks 63-41 victory over West Chicago on Wednesday. 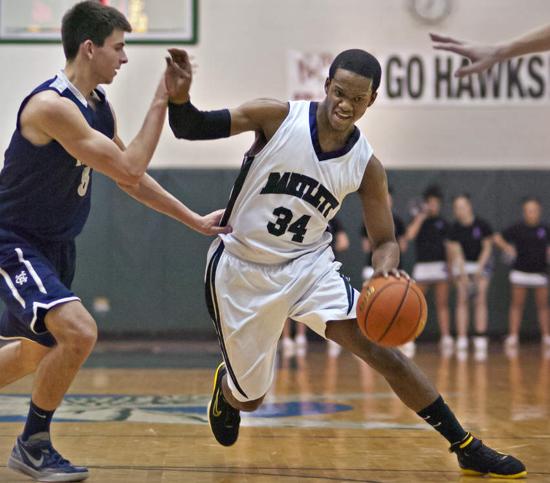 A year ago Bartlett’s Lance Whitaker was recovering from an ACL injury that cost him his entire junior year. He has comeback stronger and better than ever and on Wednesday night in front of his home crowd he entered the school’s record book as the fifth player to score 1,000 career points.

The senior finished with a team-high 21 points to lead the Hawks to their fifth straight victory in a 63-41 nonconference win over West Chicago.

“This is definitely a great feeling,” said Whitaker, a UIC recruit. “This is validation for a lot of hard work and a testament to my teammates and coaches.”

The milestone came on his last basket of the night, a short baseline jumper in traffic from the far side with 3:22 left to play in the game. The game was briefly stopped and he was presented a signed game ball.

“Our next four games are on the road so we definitely wanted to get it for him tonight in front of the home crowd,” said Bartlett coach Jim Wolfsmith. “It’s a neat thing and Lance is a great kid who really deserves it. I think even the more amazing thing than scoring the 1,000 points is the hard work he has put in to get back to the level of play he is at. And he’s done it by not worrying about how many points he is scoring but instead staying within the framework of playing team basketball.”

The Hawks (14-4) had to overcome a slow start following an emotional win over St. Charles North the night before. The Hawks trailed 8-3 early on, but went on a 11-1 run, capped by back-to-back three-pointers from Jon Moss, to pull ahead 14-9. Bartlett led the rest of the way.

A 10-2 run in the third quarter pushed the lead to double digits for the first time at 39-26. Whitaker started the run with a three point play off a strong drive to the basket. West Chicago (3-12) never got closer than seven points the rest of the way.

“I think we came in a little drained emotionally from the North game,” said Wolfsmith. “But we picked up the tempo in the second half and that started creating some open shots for us. A think we are playing real good basketball right now and everybody is contributing.”

Marcus Aluquin added 14 points for the Hawks and Moss finished with 11.