West Aurora took an eight-point lead into the fourth quarter Thursday against West Chicago, but the visiting Wildcats outscored the Blackhawks 19-9 in the final period to rally for a 45-43 DuPage Valley Conference win. 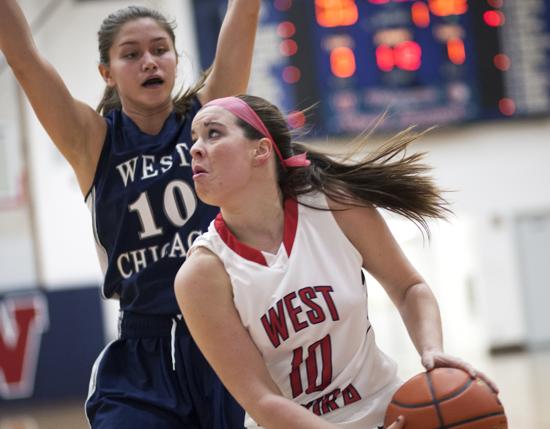 For a team that doesn’t have much returning experience — aside from senior forward Laura Panicall — every experience for West Chicago’s girls basketball team is a meaningful one this season.

That’s why the celebration after rallying for a 45-43 DuPage Valley Conference win at West Aurora was so sweet for the Wildcats.

West Chicago overcame an eight-point deficit at the start of the fourth quarter by outscoring the Blackhawks 19-9 in the final period. Four late free throws from Panicall sealed the win.

“It’s a big win for us,” Panicall said. “It’s another conference win. Just the way we all came together, it was a great win for us.”

Panicall was a huge reason why the Wildcats (4-13, 2-4 DVC) were able to pull out the win. She scored 21 points and hauled down 13 rebounds, but it was her work from the free throw line in the final minute that ultimately secured the victory.

West Aurora (8-9, 3-5) scored the final seven points of the third quarter to carry a 34-26 lead into the fourth quarter. But West Chicago countered quickly, with Panicall drilling a three-pointer, Shelly Molskow converting a four-point play and Panicall driving in for a layup to give the Wildcats the lead (35-34) with 5:32 left.

A pair of Molly Jordan free throws gave West Aurora the lead back briefly at 36-35, but it turned out to be the last lead of the night for the Blackhawks. They tied it four more times down the stretch, but were never able to get back over the hump.

Panicall’s first set of free throws gave West Chicago a 43-41 lead with 32 seconds left. After West Aurora’s Elizabeth Skaggs put in a rebound to tie it back up, Panicall calmly hit two more free throws with six seconds left to secure the win.

“I just wanted to calm down and shoot them like we do in practice,” Panicall said.

Molskow added 11 points in the win for West Chicago, which completes a week of four DVC games in eight days Saturday against Naperville Central.

“It is (a big win) because it was a team win,” West Chicago coach Kim Wallner said. “I thought it wasn’t just Laura. Obviously we rely on Laura to score, but I thought other people stepped up and played key roles.”