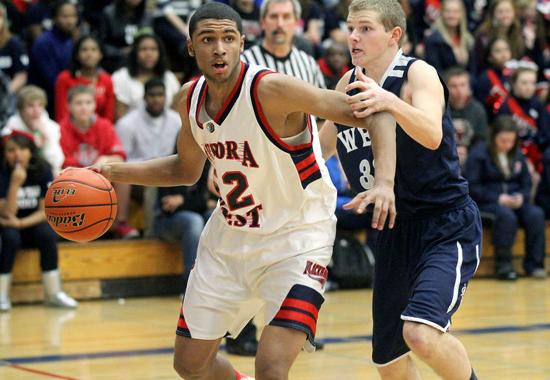 At this point of the season, West Aurora coach Gordie Kerkman knows that there’s enough film on his team out there to show that 6-foot-7 senior Josh McAuley can block shots.

But no matter how much film there is out there, McAuley continues to be a defensive stopper for the No. 10 Blackhawks, and he showed up big again in Friday’s 71-44 DuPage Valley win over West Chicago.

McAuley blocked four shots, but altered countless others, and grabbed nine rebounds to help the Blackhawks to a 41-24 advantage on the boards. He also tied for the team lead in scoring, along with Spencer Thomas, with 14 points.

“You saw a lot of those shots, early in the game, one kid put some extra arch on it,” Kerkman said. “One kid was going in for a layup and he swatted it away. He’s definitely a defensive force.”

McAuley scored the game’s first basket on a rebound put-back, and West Aurora (12-2, 6-0) never looked back. The Blackhawks never trailed and were never tied in the win.

But in the first half, West Chicago (4-14, 1-5) stayed within arm’s reach. But a 12-3 run that started in the second quarter and ended in the third quarter finally gave the Blackhawks some meaningful separation, opening a 39-19 lead with 5:40 left in the third, to put the game out of reach.

“That is great,” Kerkman said. “Some of the kids probably don’t like it, but from a coaching standpoint, it’s great when you can put five guys in double figures.”

West Chicago was buoyed by the play of John Konchar, who scored 19 points and grabbed 11 rebounds. Mitch Henke added 10 points off the bench for the Wildcats.

The Blackhawks roll into an interesting stretch of games starting Saturday night at Lockport, and are feeling good about the way things are going.

“We have a pretty good chemistry together because we all played together when we were younger, so we expected this to happen,” McAuley said. “It’s going how we expected it.”