Senior Lisa Rodriguez started and scored 10 points in her first full game back after suffering a concussion, and Aurora Central broke out of recent tailspin with a 71-46 nonconference win over Ellison. 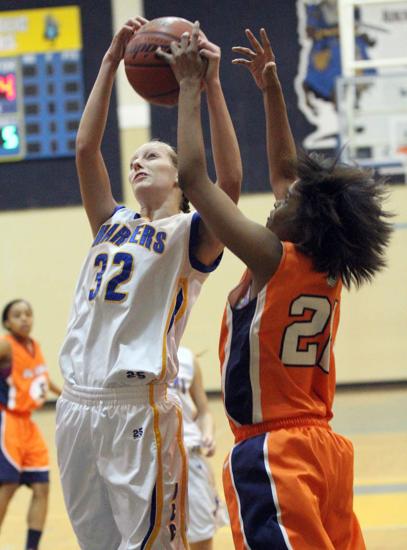 Over the past five games since senior guard Lisa Rodriguez suffered a concussion against East Aurora at the Oswego East tournament, Aurora Central Catholic’s girls basketball team went into a tailspin.

The Chargers fell under .500 as they waited for their top player to return.

Wednesday against Ellison, Rodriguez was back and the Chargers were back in the win column.

She played briefly in a loss to St. Edward Saturday, but Rodriguez started and scored 10 points to help the Chargers pick up a 71-46 nonconference win Wednesday.

“I was glad to see smiles back on my girls’ faces,” ACC coach Mark Fitzgerald said. “We had a pretty bad stretch there. They started to get their mojo going a little bit. The best thing is that when they started to make a run, the girls finally had enough confidence to fight back and keep the lead.”

“It’s frustrating because I’ve been out for a week and I’m trying to get back into things,” said Rodriguez, who also received five stitches in her face in her fall against East Aurora. “The thought of being hit again is just very scary for me. I’m easing back into things slowly but surely.”

Ellison hung around at times in the first three quarters. The Lions went on a 10-0 run in the second quarter to cut the lead to 22-20, only to see the Chargers end the half on an 11-4 run to take a 33-24 lead into the break.

Then, in the third quarter, the Lions cut the lead to 43-35 when star senior Ashley Crockett suffered an ankle injury. She missed just over four minutes of game action before returning, but the Chargers did enough damage with her out to put the game away.

Crockett filled the stat sheet with 12 points, 14 rebounds, five blocked shots, four assists and three steals. And with her out of the picture, the Chargers went on a crippling 17-0 run to push the lead to 63-35.

“That changed the whole momentum of the game for us,” Ellison coach Tony Henderson said. “When we lost her, we were down eight points, and then it was just downhill.”