Ridgewood's Sam Karim took fourth at 145 pounds in Saturday's Class 2A state meet to become the school's first wrestler to medal since 1998. 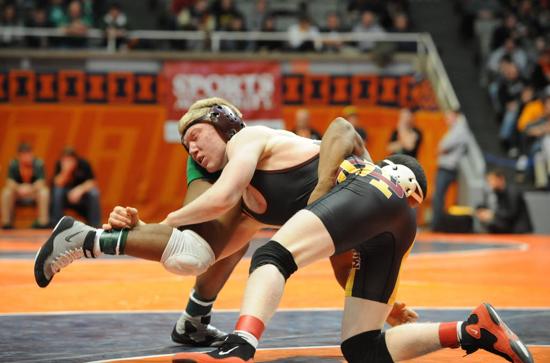 CHAMPAIGN -- Sam Karim missed one month of the wrestling season and returned out of shape and without a starting position. Despite the odds, Karim finished fourth in the Class 2A state meet Saturday.

His coach, Jared McCabe, could only wonder what Karim is capable of next season.

The junior finished fourth at 145 pounds in Class 2A to become the first Ridgewood wrestler to medal in the state tournament since Anthony Marti won the Class A state title at 130 pounds in 1998. Now McCabe has sky-high expectations for Karim next season, and he hopes Karim will work even harder in the next year to possibly win the school’s second state championship.

“I don’t see anyone that can beat him,” McCabe said. “That will be up to him. He has got to work hard in the offseason.”

Karim never wrestled before high school, but went 35-1 on the Freshman team. He finished this season with a 24-5 record after losing to Mount Zion senior Dalton Coleman, 9-6, in the third place match.

Karim’s only other loss at the state meet was 8-7 to eventual runner-up Michael Sepke of Montini. Karim led through two periods against Sepke, but tired out in the third.

Karim served a one-month suspension from school due to disciplinary reasons, and returned Jan. 24 just eight days before the regional. Karim tried to train on his own, but the results could not match the type of training he would get in the practice room with McCabe and assistant coach Lou Mezzano.

“More than anything, (the suspension) took away my conditioning tremendously,” Karim said. “It messed with my head. If I could not be able to wrestle, I would not be in any sport.”

The suspension forced Karim to miss the peak period of the season, the last month when wrestlers up their training to prepare for the postseason. Entering the state meet, only one other wrestler in Karim’s bracket participated in less than 30 matches on the season. Karim had 24 decisions and Sandwich junior Jarrod Johnson had 28.

When he returned, Karim had to wrestle up two weight classes, which made his state tournament qualification even more unlikely. McCabe was unwilling to move seniors Dylan Kaczmarckyk (34-10) at 132 and Joe Perez (33-5) at 138. Both became alternates to the state meet.

“I knew (Karim) could get here,” McCabe said. “He was 17-0 before taking the month off. He came back out of shape. He didn’t keep in shape while he was out. He lost to Shepke 16-4 in the regional.”

In a short period of time before the regional, McCabe put Karim through a grueling routine of repetitive jogs and sprints to build up his conditioning.

Karim faced a similar routine last year when he battled weight problems. To cut 17 pounds, Karim woke up at 4 a.m. every day for a run.

He reached the state meet last year and went 0-2 to finish with an 11-6 record.

“I remember when I saw the bright lights glisten off the match (for the first time at state), I would get nervous,” Karim said. “Coming back this year, I felt anxious more than nervous.”

Karim became the fifth different state medalist in school history. He hopes to join Marti next season as the only Ridgewood wrestler with more than one medal. Before his state title, Marti placed third one year earlier.