Freeport Aquin withstood a solid Westminster Christian start and cruised to a 57-39 win in Monday’s Class 1A DeKalb Supersectional. 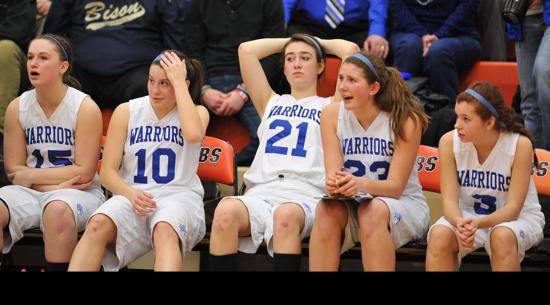 For the first 12 minutes, defending IHSA Class 1A state champion Freeport Aquin was in a come-from-behind scenario against Westminster Christian.

Trailing by two, Sophie Brunner and her teammates caught fire and then continually answered every Warrior charge in order to post a 57-39 victory in Monday’s DeKalb SuperSectional. Aquin improved to 30-3 on the year with a 22nd straight victory while snapping Westminster’s 17-game string and ending the Warriors’ year at 26-5.

“I didn’t buy into the David-vs.-Goliath, I thought we were ready, but we just never got into a flow on offense and when we needed to hit a couple big shots they just didn’t fall,” Westminster coach Ken Flickinger said.

“Defensively I thought our effort was outstanding. We knew Sophie would get her points and that 11 (Elayna Erdmier) and 35 (Katie Stykel) can both shoot threes, but they all made some opportune shots and then didn’t give us much hope at the free throw line.”

Westminster enjoyed its second five-point lead at the end of the opening quarter (10-5) and even though the Bulldogs gained a tie, Maddie Versulys scored to make it 12-10 with 4:13 left before halftime. But a three by Stykel, an old-fashioned three by Brunner plus two other buckets by the Arizona State signee topped by an Erdmeier trey completed a 17-2 surge that led to the Bulldogs’ 23-16 intermission lead.

The Warriors’ Clarie Speweik started the fourth quarter with basket to get Westminster within six (34-28), but then Brunner had her most productive quarter (12) in pushing Aquin to a 49-34 advantage with 3:31 remaining. The Bulldogs then hit 8-of-12 at the charity stripe to close out the win.

“I’m relieved, I’m happy, but this definitely wasn’t our best game nor was the River Ridge (sectional title) game, but we’re going downstate for the second year in a row and that’s something special,” Aquin coach Jeff Curry said.

Brunner, who continues to add to a 2,300-plus career point total, finished with a game-high double-double of 26 points and 18 rebounds. The 6-foot-1 senior also had eight steals and five blocked shots. Erdmier was next with 14 while Haley Chang added 10.

“She’s definitely a great player, but I thought Claire defended her pretty well,” said Versulys, the Warriors’ freshman phenom who provided help-side defense and led Westminster with 21 points. “We’ve had a lot of fun and always tried our best; we thought this would be our year so we are disappointed in losing, but we’ve never lost faith in each other.”

A notable comment since Westminster’s roster featured no seniors.

“I’m so proud of our team and do believe we gave it our best effort,” added Speweik, who finished with eight points. “We had a couple stretches when some shots wouldn’t fall and we just didn’t get out on their three-point shooters fast enough. Obviously you can’t have that happen against a team as good as they are.”