Nick Czarnowski’s interior play was too much for West Chicago to handle, as Naperville Central rolled to a 76-54 win in its regular-season finale. The junior finished with 32 points. 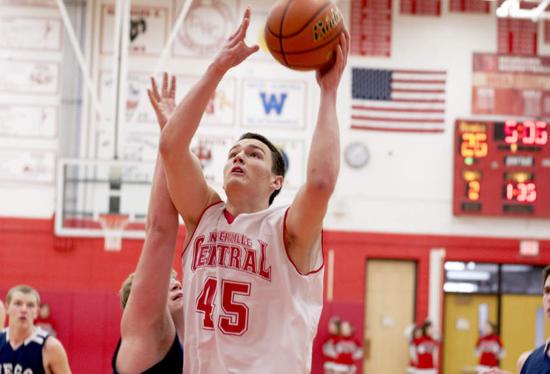 Naperville Central’s boys basketball team knew it had an advantage in the post with junior center Nick Czarnowski in Wednesday’s regular-season finale against West Chicago, and the Redhawks used that advantage early and often.

The Redhawks closed out DuPage Valley Conference play with a 76-54 home win, and Czarnowski was in the middle of just about everything.

On the first three possessions of the game, Czarnowski got a post touch and kicked it out for three-pointers, two from senior Rob Suntken and one from senior Mike Blaszczyk, to set the tone. Then the rest of the night, he did most of the damage himself. He scored a game-high 32 points on 13-of-15 shooting from the field and grabbed a game-high nine rebounds to help the Redhawks win the battle on the boards.

“Started off the game, those first three shots, I thought we made a statement right there that we were going to be a threat everywhere,” Czarnowski said. “They just kept giving me the ball. They had a tough time guarding me down there, so I just kept going up strong with it.”

But the Redhawks settled back into the game in the third, led by Czarnowski’s play around the basket. Central opened the second half on a 13-5 run to take a 45-32 lead. Czarnowski had four lay-ups and assisted a Blaszczyk three-pointer in that run.

“I was much happier with the second half,” Central coach Pete Kramer said. “I thought we did some nice things defensively in the second half, better things, and I thought we were a little more efficient on offense. They couldn’t cover Nick and we knew that. I think the kids did a nice job of looking for him.”

Konchar had another solid game for West Chicago, scoring 23 points.

Next up for Central is a likely date with Naperville North in the regional semifinals at Benet next week, with the winner facing the host Redwings for the title. Central has already played both teams twice this season.

“I think it’s great momentum, especially for our seniors,” Czarnowski said. “We really wanted to get the win for them. It was fun. Hopefully this will carry us into the playoffs.”