Anthony Gonzalez scored eight of his game-high 17 points in the first quarter to propel Leyden to a 53-28 victory over West Chicago in its playoff opener Monday night. 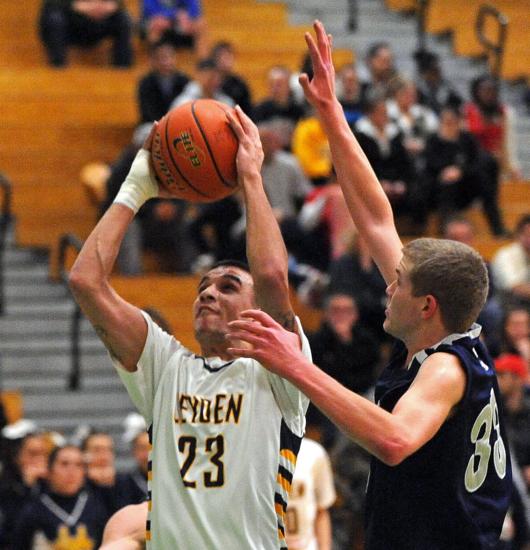 Anthony Gonzalez scored eight of his game-high 17 points in the first quarter to propel Leyden to a victory in its playoff opener Monday night.

The 6-foot-4 senior scored all of his baskets on 7-of-12 shooting in the first and third quarters. The 10th-seeded Eagles cruised to a 53-28 victory over 23rd-seeded West Chicago in the Class 4A York Regional quarterfinals. Leyden advanced to play seventh-seeded Bartlett (19-9) at 7:30 p.m. Wednesday night at York.

Gonzalez's first-quarter burst led to a 13-2 run to give Leyden (17-10) a 16-5 lead in the second quarter. He scored the first basket of the second half, which led 14 consecutive points after the break. At the end of that run, Leyden led 32-12.

After the game, Gonzalez had his right hand wrapped in an ice pack, but was certain that he would be able to play against Bartlett.

Jonathan Woolf (seven rebounds) scored 11 of his 13 points in the second half for Leyden, which bounced back from losses to Rolling Meadows and Proviso West to end the regular season.

West Chicago (5-23) was held to two baskets during a more than 13-minute span midway through the game. Jimmy Rizzo's 3-pointer early in the fourth quarter for the Wildcats was just the third basket since midway through the second quarter. The Wildcats ended the season with six consecutive losses.

"I thought the defense did some good things," Leyden coach Bill Heisler said. "They struggled to score against us. I thought we were lethargic offensively."

But Leyden had enough in the third quarter to outscore West Chicago 20-6. The Wildcats shot 1 for 7 from the floor after shooting 3-for-16 in the first half. Leading scorer John Konchar (five rebounds) was limited to eight points on 1-of-7 shooting. He connected on six of 11 free throws.

"They didn't hold down John Konchar," Wildcats coach Bill Recchia said. "We as a team didn't execute our offense."