Mooseheart may have made it to the sectionals for the first time in program history, but the players find themselves in familiar surroundings. The Red Ramblers play at home Wednesday against Chicagoland Jewish. 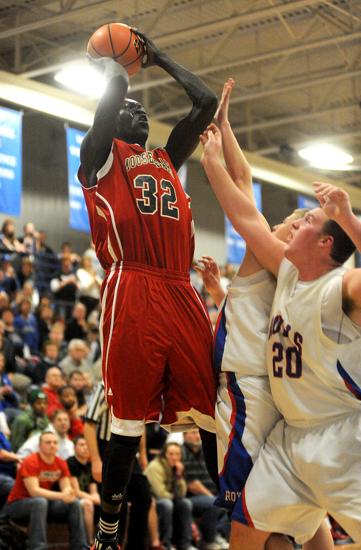 Mooseheart’s basketball players may have made it to the sectional level of postseason competition for the first time in program history, but they find themselves in familiar surroundings. The Red Ramblers play at home Wednesday against Chicagoland Jewish in a 7:30 p.m. semifinal of the Class 1A Mooseheart Sectional.

The 24-5 hosts advanced by downing Hinckley-Big Rock 55-38 to capture the Westminster Christian Regional at Judson University last Friday. It was the school’s first regional crown and only its second postseason title ever. Mooseheart won a District title in 1963.

Chicagoland Jewish, which is located in Deerfield, rolled past Ida Crown 67-38 to win the Christian Liberty Academy Regional Friday and climb to 20-3.

“We’ve had a very, very good year,” said Tigers coach Marty Dello, who previously coached at Barrington and still teaches there. He is in his second season directing the team after taking several years off from coaching while his wife was ill.

Chicagoland Jewish placed second to Class 2A Providence St. Mel in the Chicago Prep League and its other two losses were to Gordon Tech and North Shore Country Day.

The Tigers are even smaller than Hinckley-Big Rock with no starter over 6-1 and face a daunting task dealing with Mooseheart’s trio of Sudanese starters in 6-7 Mangisto Deng, 6-10 Makur Puou and 7-0 Akim Nyang.

“For sure, we’re a very short team,” said Dello, who has three guards averaging in double figures. “Sometimes, I’ve played five guards at once. Other times, I’ve used two guards and three forwards. What makes us tough to play is that we play 10. That’s been big for us.”

Josh Newlander is a 5-11 “bonafide point guard” who averages a team-best 16.1 points per game, said Dello.

He is joined by brother Jake, a 6-foot senior who averages 12.6 points, and 5-7 junior Joshua Silverman, who averages 11.5 points.

“(Mooseheart’s height) is not anything you see every day as high school players,” Dello said. “While it can be intimidating or cause some nervousness, we tell our players the first part of the game has to be like a boxing match where the opponents feel each other out.”

“That’s part of why Mooseheart is in this sectional,” Dello said. “Their other kids have stepped up and that’s a credit to (coach) Ron (Ahrens) and the job he’s done with them.

“It’s gonna come down to how well we shoot the ball. If we score, we’re able to set up our defense, which is pressing the ball. For us, making shots is one of the more important things we do. H-BR pressed them but our press is a little different.”

The Royals struggled with their shooting against Mooseheart’s 1-3-1 zone, especially from outside where they made just 3 of 20.

“We’re so long that it’s just hard to shoot,” Ahrens said. “I know people are thinking if you can hit the three you’re gonna be able to beat Mooseheart, but I tell you what, we defend the three-pointer well. There’s not many uncontested threes that kids get off against us.”

The younger Newlander does concern him.