Jake Newlander’s three-pointer with 23 seconds to play capped Chicagoland Jewish’s comeback from 11 points down in the fourth quarter as the Tigers pulled out a 70-67 win over Mooseheart in semifinal action at the Class 1A Mooseheart Sectional. 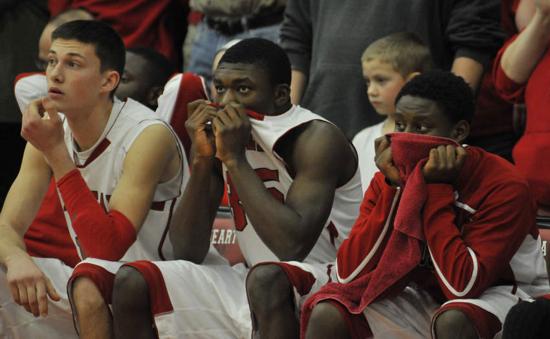 Mooseheart players watch as their lead slips away in the fourth quarter of their sectional semifinal with Chicagoland Jewish. | Mary Beth Nolan~For Sun-Times Media

When Mooseheart and Chicagoland Jewish took the floor Wednesday in the semifinal round of the Class 1A Mooseheart Sectional, both teams were looking to reach uncharted territory.

Neither program had ever played in a sectional final, and Mooseheart last week won its first regional title since class basketball was installed in the state over four decades ago.

With Newark waiting for the winner after dispatching Hope Academy earlier in the night, it was Chicagoland Jewish that moved on as Jake Newlander’s three-pointer with 23 seconds to go gave the Tigers the lead for good and eventually a 70-67 win.

Newlander’s dagger from the deep right corner was the 10th trey of the night for the Tigers (21-3) on their 28th attempt, and capped a rally that saw them come back from 11 down in the fourth quarter.

“I had that feeling (it was going in),” Newlander said. “When you are shooting well you know it when it leaves your hand, and thankfully it went in.”

Newlander later added two big free throws with 9.7 seconds left and finished the night with a team-high 25. With brother Josh scoring 19 of his 21 in the second half, the Tigers scored 46 points in the final two quarters.

That helped Chicagoland Jewish set up its press, which had bothered the Red Ramblers all night long. Mooseheart struggled against the pressure, and that was a big equalizer as junior Makur Puou was a force for the Red Ramblers, scoring 30 points, grabbing 18 rebounds and blocking six shots.

He had 21 points and 14 boards at halftime as Mooseheart bounded out to a nine-point lead (33-24). With the Tigers collapsing a zone inside, he was unable to duplicate those numbers in the second half.

“We wear people down, and it’s in the fourth quarter and that’s when we win our games,” Tigers coach Marty Dello said. “That game played out exactly as I expected. We felt like if we could make baskets we could set up our defense and that was the difference.”

Mangisto Deng scored 13 points for the Red Ramblers, who at 24-6 finished one of the best seasons in school history.

“We thought if we could make it to sectionals, playing on our homecourt, we expected to win but we didn’t,” said coach Ron Ahrens. “I never felt comfortable being up (double digits) because of the way they shoot the three, and you have to give them credit because they shot it very well in the second half.

“We wanted to get that feeling of getting to a supersectional, and it didn’t happen. Basketball is a funny game. They played well enough to win.”