Chicagoland Jewish to pray then play

The IHSA has ruled that the Class 1A sectional final between Chicagoland Jewish and Newark has been moved from Friday to Saturday to accommodate the Jewish Sabbath. 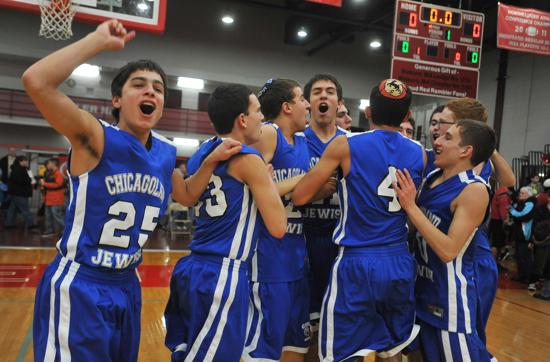 Chicagoland Jewish Tigers players celebrate their win over their host Wednesday in a semifinal of the Mooseheart Sectional. | Mary Beth Nolan~For Sun-Times Media

Well before the Chicagoland Jewish boys basketball team plays its Class 1A sectional final Saturday at Mooseheart, it will take a ride today.

After school, a group of two dozen team members, parents and school officials will board a bus from the school’s campus in Deerfield for a trip to Naperville. They will check into a hotel and by sundown, approximately 5:30 p.m., will begin to observe the Jewish Sabbath.

By 6:30 Saturday, after the Sabbath ends, they will board another bus for the 10-mile trip to Mooseheart, where they will play Newark at 7:30 p.m.

“We're doing this so we can be at the game on time," Chicagoland Jewish Athletic Director Josh Gleicher said. "It’s an interesting experience that doesn’t happen every year."

The game was originally scheduled for tonight, but was moved to Saturday by the Illinois High School Association to accommodate the Sabbath. Thursday, the IHSA announced a revised schedule which will continue to adhere to the school’s religious beliefs if the Tigers advance in the state tournament.

If the Tigers win Saturday, and again in Tuesday’s supersectional round, they will play in the 1A state semifinals early in the afternoon Friday, March 8. The IHSA announced Thursday it was flip-flopping the 1A and 2A games scheduled for Saturday, March 9. Originally, the 1A third place and championship games were scheduled for 12:15 p.m. and 2 p.m. respectively. Because the Sabbath begins at sundown Friday and ends at sundown Saturday, the IHSA said it has moved the 1A games to 6:30 p.m. and 8:15 p.m. and slid the 2A games into the afternoon slots.

This is not an isolated act by the IHSA. For the past two years, it has moved the 1A wrestling regional at Walter Lutheran Saturday day to the evening to accommodate Ida Crown's observance of the Sabbath.

“We try to be proactive,” IHSA executive director Kurt J. Gibson said. “We have learned over time to work with our Jewish schools and have gotten better at planning things.”

Which means Saturday, Chicagoland Jewish will celebrate its faith by day, then play basketball at night.

"For our students, parents and fans, this is so meaningful," Gleicher said.