In January, five Chicagoland Jewish players along with 24 classmates, took an inspiring three-week trip to Israel. 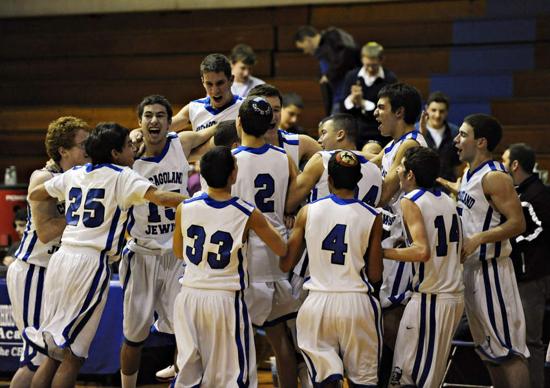 This season, players from Chicagoland Jewish’s boys team have spoken openly about how close they are to one another. The Tigers, a Class 1A sectional finalist, may represent one group in which the pronounced bond is truly real.

“There’s nothing better than winning a regional championship with brothers, with your family,” senior Daniel Fishbaum said of his team, which won the school’s second Class 1A regional title with a 67-38 win over Ida Crown on Feb. 21. “Nothing can beat that.”

In January, five Chicagoland Jewish seniors — Fishbaum, Jake Newlander, Rami Eilian, Josh Flink and Daniel Sigler — along with 24 classmates, took a three-week trip to Israel. They started in the southern part of the country, in Ketura, then moved north to Jerusalem, finishing with a week in a town surrounding the Sea of Galilee.

But it was anything but a vacation for the students.

“It was less touristy and more about learning facts on the ground and about people’s lives,” Fishbaum said.

Each day, Fishbaum and his classmates listened to various speakers while walking the streets near where they stayed. After dinner, they gathered in a hotel conference room to discuss and reflect on all they had experienced.

Slowly, the players came to understand the political climate in Israel, a country in conflict with Palestinians for decades — and which was holding national elections at the time of their trip. Combined with daily prayer, the talks helped students combine what they were witnessing to what it meant in the larger scope of mankind.

“Just being there, knowing where I was in relation to my religion, it made me feel spiritual,” Newlander said. “I felt very connected to the heritage of my people.”

Basketball was far from their minds, as the five Tigers managed just a few light workouts while in Jerusalem.

Back in Deerfield, the players who stayed home had games to play. Thanks to some creative scheduling by athletic director Joshua Gleicher, Chicagoland Jewish played only three games while the seniors were gone. The Tigers won all three.

“It was a great learning experience, opportunity and maturing of both (sets) of kids,” said Chicagoland Jewish coach Marty Dello, whose team was scheduled to play Mooseheart in the semifinals of the Mooseheart Sectional Wednesday. “Not every year are you going to have that. This year, it worked.”

Since returning, on Jan. 24, the Tigers have lost just one game.

While in Jerusalem, Fishbaum and his classmates took a trip to the Dome of the Rock. The shrine sits in the center of a platform in Jerusalem known as the Temple Mount, and is thousands of years old. Fishbaum did not climb to the top, choosing to stay off to the side, in awe of its history and meaning.

“There was a tangible force,” Fishbaum said of what he felt.

Whether the universe was speaking to Fishbaum is open to debate. What matters is what he and his Tigers teammates believe. And because of a midseason, life-changing field trip, they believe they are playing for something greater than themselves.

“We can’t give voice to what it was,” Fishbaum said. “But you can see it manifest in our game and in school.”