Newark defeated Chicagoland Jewish 67-64 Saturday night in the championship game of the Class 1A Mooseheart Sectional. Brett Anderson led the way for the Norsemen with 28 points and 12 rebounds, and Jack Clausel added 20 points. 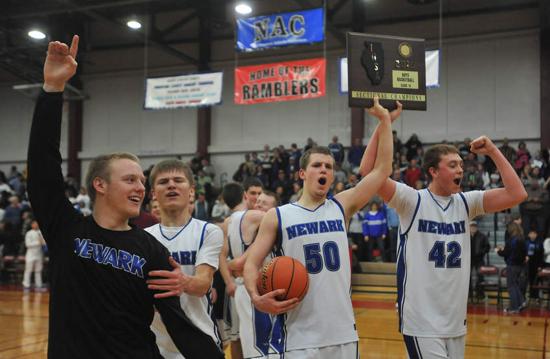 Anderson scored 14 of his game-high 28 points in the fourth quarter to lead the Norseman to a thrilling 67-64 victory over Chicagoland Jewish in Saturday night’s Class 1A Mooseheart Sectional championship.

They advance to face Eastland in Tuesday’s DeKalb supersectional at Northern Illinois University.

“When Joe [Hughes] fouled out we had guys out there without a ton of experience and I told Joe ‘I’m not going to let you foul out of your last game,’ ’’ Anderson said. “I just put it all out there and did everything I could to get the win.”

Anderson’s bucket with 3:10 left in the contest gave the Norsemen their biggest lead of the night at 59-51, but the Tigers wouldn’t go away easily.

A pair of three-pointers by Josh Newlander (22 points) and a three from Jeremy Goodman pulled the Tigers to within 66-62 with 33 seconds left. A putback by Newlander with 12 seconds to go cut the score to 66-64.

Unable to get a turnover, the Tigers were forced to foul. They sent Anderson, who had made all nine of his free-throw attempts to that point, to the line. Anderson missed the first, but drained the second to make it a 67-64 lead.

Chicagoland Jewish (22-4) had a chance to send the game to overtime, but Newlander’s long three-point attempt fell short.

“We fought hard the whole way, but just couldn’t pull this one out,” Newlander said. We just couldn’t get our shooting going like we usually do. It was on and off tonight.”

The Tigers shot 50 percent from beyond three-point arc this season, but shot only 6-for-19 on Saturday.

Both teams were plagued with foul trouble. Avidan Halivni and Nathaniel Moses fouled out for Chicagoland Jewish, while Newark freshman Jack Clausel (20 points, seven rebounds) stayed in the game despite having four fouls and Hughes fouled out late in the third quarter.

The stockpile of fouls resulted in big nights at the free-throw line. Newark shot 25-for-35 and Chicagoland Jewish was 17-for-27.

“If a team beats you and you play your tail off, you tip you hat and tell them good job,” Tigers coach Marty Dello said. “That’s we talked about, because they knocked down their shots and were able to set up defense and we had our worst shooting performance.”