Lyons came back to win over Lake Park in the Conant Invitational title match Friday night. The Cougars used a late 7-1 run to win the second set. 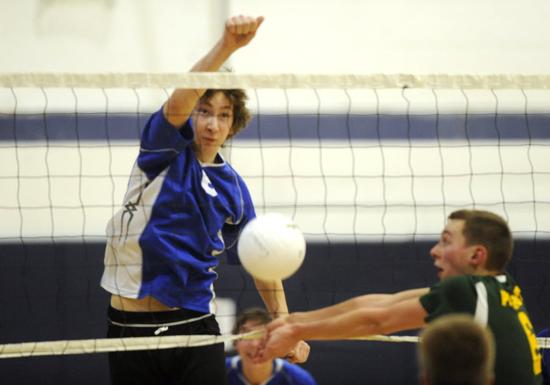 Early in the season, Lyons' boys volleyball team is learning to keep its cool.

Lyons was on the brink of losing the second set to Lake Park in Friday night's Conant Invitational final, but found a way to rally with a daring move by coach Joann Pyritz. Lyons won 25-16, 27-26 over the Lancers, a state quarterfinal team from last season, but there was more than a few nervous moments.
To speed up play, the tournament used a hard cap to 27 points in the first two sets of every match. The final was decided when Kyle Smuda scored the final point on a kill off Marko Kostich's assist. Lyons (4-1) tied the second set at 26 when Kostich's kill came off a pass from Jake Bobrowski, who had just entered the match and picked up his only assist. It was the first time Bobrowski came in to set during the tournament.
Pyritz called on Bobrowski when Lake Park (3-2) took a 23-20 lead. She shifted her starting setter, Kostich, to right-side hitter for one rotation.

"We weren't producing offensively and also our passing was not helping us too much on that rotation," Pyritz said. "I decided to put another setter in."

Pyritz's gutsy move paid off. The Lancers led 24-21, but couldn't close out the set. Lyons used a 7-1 run to lead 25-24 on Dillon Hock's back-to-back hitting errors. Hock (four kills) is the only returning starter from Lake Park's state tournament team.
"I told the guys, 'In volleyball, you want to be in there, being around the lead,'" Lake Park coach Tim Murphy said. "But you want to be the team that scores the last five points."
Kostich had a match-high seven kills, mainly on second-contact attacks. Clayton Smentek added six kills for Lyons while Jeff Yost led Lake Park with six kills. Lyons led 7-2 in aces and 8-3 in blocks during the match.

"This is a great start to the season," Smentek said. "Everybody feels a boost. This will get our confidence up."