Over the first four innings, Lyons slapped, bunted and went for the extra base at every turn against Queen of Peace. Six hits and five Pride errors later, LT scored four runs en route to a 5-1 nonconference win on Tuesday. 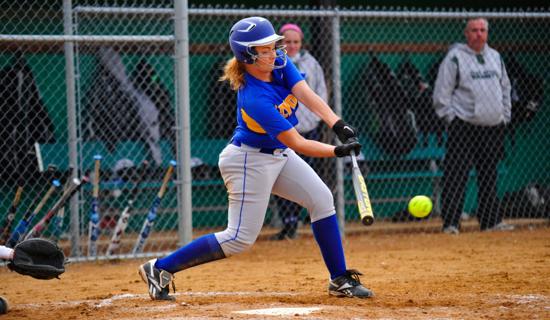 Over the first four innings, Lyons slapped, bunted and went for the extra base at every turn. Six hits and five Queen of Peace errors later, it was 4-0.

"We've had kind of a hard time the past couple of games," Lions junior Kayla Morrissey said. "But I think we really came out to play today with the right mindset. Definitely during warmups you could feel that the energy was bigger.

"Also, we tried to make the other team make plays. We tried to hit the ball, and make them work."

Morrissey had two hits, an RBI and reached base all four times. Ashley Koziol and Becky Ryckman also had RBI in support of pitcher Katie Dzierwa (2-0), who took a no-hitter into the fifth inning and finished with a two-hitter.

Danielle Sanchez had an RBI double for Queen of Peace (4-3).

The tone was set early by Lyons leadoff hitter Stefanie D'Anna, who beat out a bunt back to the Pride pitcher Lindsey Cudecki. D'Anna was later thrown out trying to score by second baseman Caitlin Fitzgerald, but Koziol would reach on an error and eventually come in on an infield safety by Morrissey.

Alyssa Collins singled and scored on an infield grounder by D'Anna in the second, while base hits by D'Anna and Koziol keyed a two-run fourth. Lyons' final run was produced via a walk by Alexus Pelletiere and an RBI single by Ryckman.

Dzierwa retired the first 11 Pride batters she faced before Jazmin Ramirez reached on an error. Fitzgerald would reach on a dropped third strike in the fifth, before Sanchez broke up the no-hit bid with a line RBI double to the fence in right-center. Ramirez singled in the sixth for Peace's other hit.

"It's really exciting. I liked having a chance to work (as a pitcher) for my team," Dzierwa said. "I usually play shortstop, but to be (in the circle) it feels real good to help out even more. Being a pitcher and a shortstop, it's a really good experience just being able to help out however I can."

Peace's defense came up big at times, recording five putouts at the plate. But the five errors were costly.

"The defense was definitely not there at all today, nor was much of my pitching," Pride coach Nikki Schuch said. "LT did what they should do, put the ball in play and wait for us to make the errors, which we did.

"The mental toughness... we weren't ready. It's been getting better gradually, but usually it's been the defense is there and offense isn't, or the offense is and the defense isn't. We're just looking for ways to put it all together every single inning."