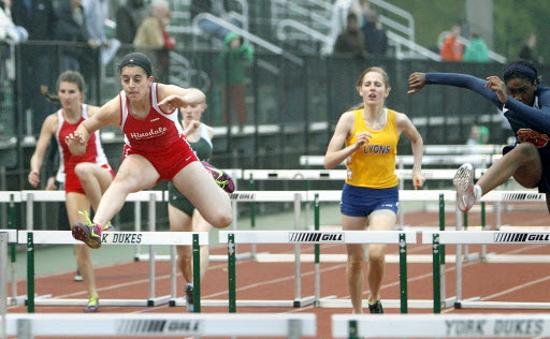 Cara Tenerelli’s track and field career as a jumper actually started in kindergarten as an Irish dancer.

Tenerelli can still perform the jigs and reels, but she dropped Irish dancing in sixth grade as she became more involved in soccer, track and pompons in middle school.

The Hinsdale Central senior from Clarendon Hills has become a steady point producer for the Red Devils track team. She won two events Saturday while leading the hosts to their fourth consecutive Devilette Invitational title.

How did a Serbian-Italian girl ever become attracted to Irish dancing?

“In preschool, one of the girls’ family started an Irish dance school, the Mulhern family of Hinsdale,” Tenerelli said. “(The girl) brought in her friends. My mom (Allison) figured it was a phase and that I would do it for two years. I loved it.”

Tenerelli traveled to several feis, including competitions in Nashville and St. Louis. Her visit to New Orleans made such an impression, she has decided to attend Tulane University, but will not compete in track and field.

“Cara was one of our first students in the school,” O’Kane said. “I still see her and I’m so proud of how successful she is. She’s a beautiful young lady. She has worked so hard for what she does.”

Tenerelli did not want to give up Irish dancing, but could not commit the time. At Clarendon Hills Middle School, she belonged to the track team and played soccer for the Hurricanes and later the Naperville Soccer Association during the club season.

In high school, she competed all four years in track and poms, during both the football and basketball seasons.

“I was an alternate on the state championship team,” Tenerelli said. “As a freshman, I had no idea. I took it for granted and how big an accomplishment it was to win state. That motivated me so much. I want to be out there and run on that track (at state).”

With her prep career approaching an end, Tenerelli is focused on reaching the Class 3A state meet in Charleseton in the 100-meter hurdles.
“That’s my biggest goal,” Tenerelli said.

“Cara Tenerelli has progressed tremendously over her four years as a track athlete,” Richards said. “Her freshman year we brought her down to the state meet as a spectator because we wanted her to see what she had the potential to be a part of. She has gotten better and better each year.

“Last year as a junior she qualified for the state meet in the 100 hurdles. She has shined as a senior, winning the 100 hurdles at the (WSC Silver) indoor championships. She is also a valuable member of several of our sprint relays and has finished in the top three in every meet that she has competed in.”