The Zadina family has used Loyola soccer's conditioning to raise money to purchase wheelchairs for those in need. 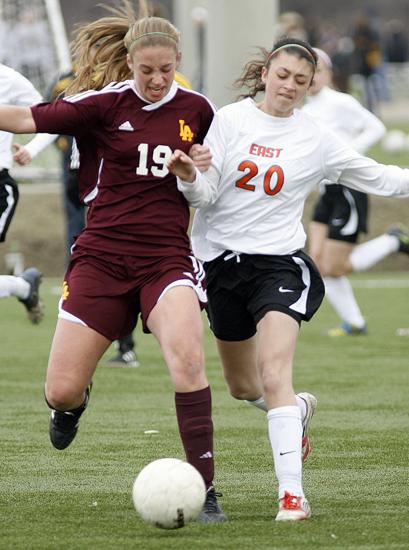 For Elle, Caroline and Narita Zadina, the soccer field is about achieving goals that go well beyond the final whistle.

According to Narita Zadina, she had been brainstorming ways to raise money to purchase wheelchairs for those in need when her daughters, Elle and Caroline, suggested that perhaps her fundraising could traverse the sideline.
“My girls just saw how excited I was about it and said, ‘Can we do this for our team?’ ” Narita Zadina said.

The project follows a simple model.

Loyola girls soccer coach Craig Snower tracks the number of miles the Ramblers accumulate during practices and games for an entire month. The players — in addition to all of the running they do — secure pledges from those willing to give a specified amount of money per mile.

“The whole idea is we love to play soccer and run and move and jump,” said Elle Zadina, a Ramblers junior midfielder. “We want to use our mobility to help others have the same opportunity as us and get that chance to move.”

By the end of the month, the number of pledges multiplied by the 30 or 40 miles each girl runs can net substantial proceeds. Elle Zadina said that last year’s varsity soccer team was able to raise $2,000, which bought 28 wheelchairs.

“Most service projects, you just get the money,” Elle Zadina said. “You don’t really get to see the effects. My mom actually personally delivered the 28 wheelchairs to people in Costa Rica. We got to see the pictures of them receiving their wheelchairs and it was just life-changing and absolutely incredible.”

If it was life-changing to see the pictures, it also meant a lot to Narita Zadina to deliver the wheelchairs. She said that for children used to staying home and helping their parents around the house, this was their chance to go to school.
For adults used to carrying their children around all day long, this was literally weight off their back. And the gratitude created by something as simple as a wheelchair made a deep impression on Narita Zadina.

“Life regains some normalcy,” Narita Zadina said. “The families were so grateful, incredibly grateful, for such a simple gift that it’s tremendously motivational. It keeps you wanting to raise money and do more because such a small donation has such a lasting, sustainable impact of change for those families. It was totally amazing.”

The service project is illustrative of Loyola’s mission: “To form women and men for meaningful lives of leadership and service in imitation of Jesus Christ ...”

“It represents, obviously, everything that they’re trying to teach us,” said Caroline Zadina, who played for the Loyola girls soccer team and graduated in 2012. “Where Loyola students are coming from, we’re very privileged and we’re very lucky and we need to realize that others aren’t as lucky and we can do a lot to help them. It was a great way for us to tie soccer into helping others.”

She estimated that at least 70 percent of the Ramblers’ soccer team took part in the project last season, with a few players securing just a few pledges but the majority securing five to 10 pledges.

She said that she could see the project make headway from her junior year to her senior year as her teammates began to figure out how the project worked. The service project continued even when Caroline Zadina moved on to DePauw University.

Elle Zadina, who has verbally committed to play Division I soccer for Cincinnati, will also eventually leave the Ramblers behind, but before she does, she has miles to run, wheelchairs to fund — and a country to visit.

“We’ve been talking about whether or not we can do a mother-team trip as a mission,” Narita Zadina said, “because if our children could see firsthand the joy that they bring, they would be even more committed and enthusiastic to doing this for the rest of their lives.”