Clayton Smentek has played a major role in Lyons compiling a 15-2 record this season. The outside hitter has 82 kills, 18 blocks, 77 digs and eight aces this season. During the offseason, Smentek is a setter for his club team 3rd Coast Elite. 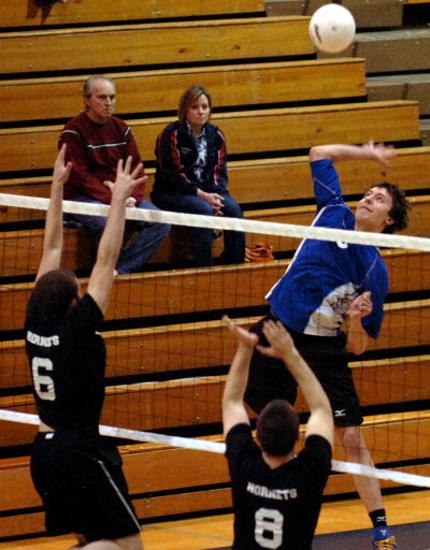 In the summer, he distributes.

The 6-foot-5 outside hitter is just following in the footsteps of his older sister.

“I started playing (competitively) when I was 14, playing for club,” Smentek said. “My sister used to play and she got me into the game. I started out and just kept developing.”

During the offseason, Smentek is a setter for his club team 3rd Coast Elite. He believes that experience has helped him click with Lyons setter Marco Kostich.

“My setter and I have good communication,” Smentek said. “If a set is off I’ll tell him because as a setter I know I can help out a bit. I really like setting, but the change of pace hitting outside is a lot more fun. I get a chance to hit more, so I feel like I’m contributing more to the team.”

That versatility is something Lyons coach Joann Pyritz noticed immediately when Smentek first entered the program.

“Clayton is a multi-purpose player,” Pyritz said. “I felt good that he would be able to do a lot of different things on varsity. Even as a junior, he had the same consistency and control. He’s lived up to what I expected from him.”

Smentek has played a major role in Lyons compiling a 15-2 record this season. He already has 82 kills, 18 blocks, 77 digs and eight aces.

“I really like his consistency,” Pyritz said. “His level-headedness has really made a difference this season. As the season goes on, he’ll only get better.”

Smentek has enjoyed volleyball for as long as he can remember. That being said, his accomplishments with the tradition-rich Lions have exceeded his expectations.

“Growing up, I never thought about becoming a starter for Lyons because it’s such a big school,”
Smentek said. “I know one day I’ll be thinking back and it will be amazing to remember that I was a starter for a school with 4,000 students. It will be something I’ll remember forever.”

Smentek is the Lions’ lone returning starter after finishing with 88 kills as a junior.

“Last year helped me a lot,” Smentek said. “We had seniors on the court so I was not the leader, but the experience being around them helped me. I try to make sure everyone is focused and if we get down a couple points not to get frustrated.

“I’m more of a leader now and it’s a good role. We have a lot of leaders so I don’t have to take it all on by myself. I just try to calm everyone down and make sure we don’t freak out.”