De La Salle running back Mikale Wilbon gave Vanderbilt a verbal commitment during a visit to the school this weekend. 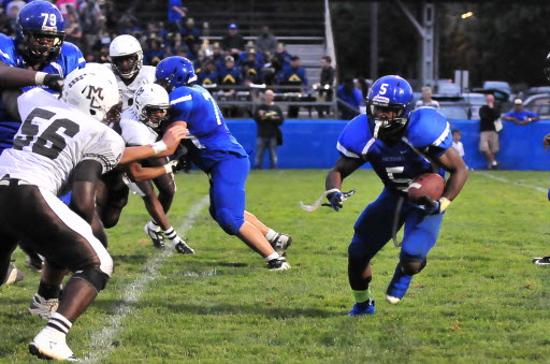 One of the prospects in the Midwest garnering the most recruiting attention is De La Salle running back Mikale Wilbon.

Wilbon, who is a three-star recruit on FoxSports NEXT, gave his verbal commitment to Vanderbilt Saturday, according to De La Salle coach Dan O'Keefe. According to FoxSports NEXT national analyst Allen Trieu, Wilbon is a natural fit for the Commodores.

"Vanderbilt has hit Chicago hard and is having some success," Trieu said. "Wilbon continues that for them and I think his versatility allows him to fit into their offense."

Vanderbilt signed Glenbard West senior tight end Nathan Marcus and Thornton defensive back Jalen Banks in the Class of 2013 from the Chicago area, and Wilbon continues that Chicago focus.

Wilbon chose Vanderbilt over offers from Arizona State, Mississippi State, Iowa, Illinois, Indiana, Purdue, and many others, and looks to continue his success at De La Salle before heading to the SEC.

"Mikale has been productive throughout his De La Salle career," Trieu said. "He had a big sophomore year.

"He's compact, has breakaway ability and he catches the ball well out of the backfield. He's also a tough kid, and that really stood out when I got the chance to see him play last year."
It isn't just at De La Salle that Wilbon has had success, and head football coach Dan O'Keefe expressed that previously to FoxSports NEXT.
"College coaches love him. He's been MVP at almost every combine, college day camp that he's been to," O'Keefe said.  "He's impressive in every way. He can catch the ball too. He's everything you want in a back."
''He's very, very tough to bring down. He started on varsity as a sophomore and rushed for over 1,600 yards as a 15-year-old in one of the toughest leagues in the state. It's nice to have a guy like that."