U-High senior Conrad Harron was an early success story, climbing to the No. 1 spot in the USTA national rankings for 12-year-olds. But after a traumatic car accident that nearly took his life, the senior now seeks to regain form and earn a state title. 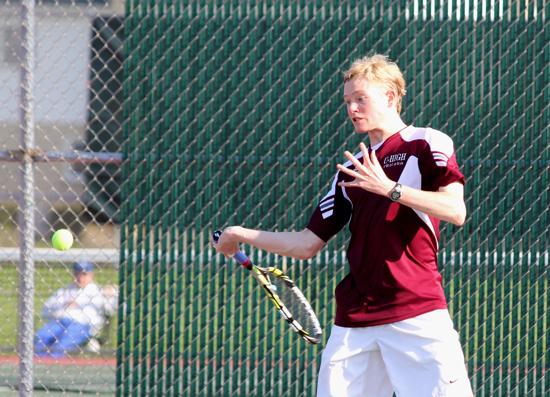 By the age of 12, Conrad Harron was the best of the best when it came to junior tennis.

Harron, who grew up and lives in the Lakeview neighborhood, had climbed his way to the No. 1 spot in the United States Tennis Association national rankings for 12-year-olds.

Less than two years later, Harron almost lost everything, including his life.

After competing in the 2008 Orange Bowl International Tennis Championships in Miami, Harron and his dad, Michael, took a trip to the Everglades.

As the passenger, Conrad reached forward to adjust the GPS monitor and in that split second their car was hit on the passenger side by an SUV.

Conrad’s head slammed into his father’s head and both lost consciousness. Michael came to as both were being airlifted to a hospital in Miami. Conrad wasn’t so lucky. A fractured skull and swelling in the brain left him in a coma and on life support for four days.

“It’s a horrendous thought that you’re going to lose a child,” Michael said. “They gave him a little less than a 50 percent chance to survive and if he did survive they thought he would be significantly diminished as far as memory and ability to see out of his left eye.”

Conrad, who had damage to his left eye socket, was taken for CAT scans on an hourly basis. Finally, the swelling stopped and began to retreat and Conrad was out of the woods.

“I miraculously got better,” said Conrad, who has no recollection of the accident or his stay in the hospital. “There’s about a two-week period of my life that I don’t remember. My parents tried to explain to me what happened but I think it was very hard for me to understand how close I was to death.”

Still, he made an incredible recovery and was able to step on the tennis courts again just six weeks later. But his game wasn’t as smooth and the loss of 20 percent of his body weight set him back as well.

“At first he could not spatially judge the distance of the ball to his racket,” Michael said. “What Conrad knew was for him to regain his weight and muscle and his incredible level of fitness and regain his stroke it would take 9-12 months. Through no fault of his own, he was made uncompetitive in a blink of the eye.”

But Conrad wasn’t going to give up tennis. Two months of physical therapy helped him get better and he continued to play USTA tournaments at a high level.

Harron estimates that it took him a year to get back to his level of play from before the crash and during that time his competitors were getting better. While he hasn’t reached the No. 1 national ranking he had when he was 12, he’s still fierce on the courts and he isn’t using the accident as a crutch.

“There are times where I get down on myself and frustrated for having lost that time, but I’m not going to let it hold me back,” Harron said.

Harron didn’t play IHSA tennis his first three years in high school, but now a senior at U-High, he decided to compete and try to bring home an individual state title to his school located on the campus of the University of Chicago.

“It was important for me to play for my team because I wanted the experience and to get that team atmosphere,” Harron said. “I definitely consider myself top four in the state at the moment. I think my chances [to win state] are very high.”

Payton’s Evan King was the last Chicago player to win a state title when he won as a freshman in 2007. Harron is 11-1 this season with his one loss coming to Lake Forest’s Peter Tarwid, 6-3, 7-5.

“[State] is grueling, so I’m going to have to get in the gym the next couple weeks and really work on my fitness a little bit more,” Harron said. “But I feel like I’m hitting the ball really well and playing smart.”

Harron will be attending Williams College in Williamstown Mass. in the fall where he plans to major in economics.