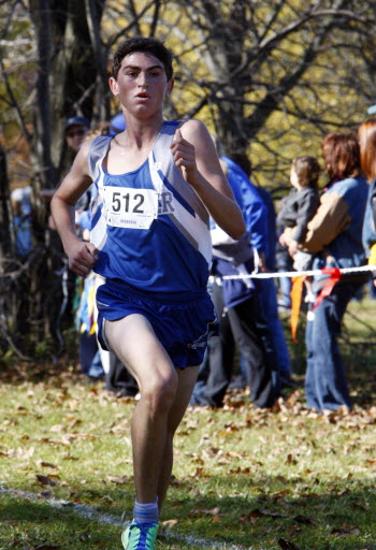 New Trier lost its top three runners from last year’s team that finished 14th at the Class 3A boys cross country state meet. But coach David Wisner said there is a good chance his Trevians will improve on that finish in 2013.

“I think we have a much better team, though we won’t know until November,” he said. “To be honest, my expectations are a top-5 finish (at state). We have to jump over a lot of teams, but I know we have the talent. We’ve had the best summer we’ve had in my eight years as head coach. If we avoid injuries and sickness, a top-5 finish is realistic.”

One of the reasons for optimism is the return of senior Peter Cotsirilos, who has missed the last two cross-country seasons with stress fractures. A track state-meet qualifier, Cotsirilos is an all state-caliber runner in cross country.

Wisner said it will be necessary to limit Cotsirilos’ mileage during the season, and the runner likely will do some training on a stationary bike.

Senior Chase Silverman should battle Cotsirilos for the team’s No. 1 spot. Senior Connor Trapp was the team’s No. 2 runner at times last season, junior Om Kanwar is coming off a strong summer of training and junior Austin Santacruz continues to develop in the sport after having focused on baseball early in his high school career.

The Ramblers went through a rebuilding season last year after having competed at the state meet in six of the previous seven years.

“It is important for our (current) kids to know that these kids were ordinary freshmen and sophomores, who came in and toughed it out,” Loyola coach Dan Seeberg said. “They didn’t have the pedigree of kids who come in to (other high schools). But they eventually made it to good colleges to run.”

This season, junior Christian Swenson, senior Matt Randolph, senior Teddy Brombach, junior Jack Carroll and junior Spencer Kelly will be among the runners trying to lead the Ramblers back to the state meet.

Spartans senior Daniel Congbalay will be looking to challenge for the team’s No. 1 spot after the graduation of 2012 state qualifier Dan Cheung.

However, Congbalay was not part of Glenbrook North’s training sessions this summer. That doesn’t mean he was taking it easy.

Congbalay and his family spend the summer in the Northwest Michigan town of Frankfort, and for the second straight summer he trained with the local high school’s cross country team.

“I love training with them,” said Congbalay, who keeps in touch with the Benzie Central runners via Facebook during the school year. “We run anywhere between five and 10 miles (at a time) and there is a significant amount of hills. We run on beaches and around a lake.”

Congbalay’s mother Beth, who was a college runner at James Madison in Virginia, also summered in Frankfort as a child, and she too trained with the Benzie Central team.

Titans runner David O’Gara narrowly missed qualifying for last year’s Class 3A state meet when he was outkicked down the stretch at the Niles West Sectional.

The senior has put in a great deal of work this summer in an attempt to ensure history won’t repeat itself. O’Gara has run heavy mileage to increase his stamina and been in the weight room to build his strength, hoping both will give him that extra kick at the end of races.

“Honestly, in my 23 years, his (summer) mileage is as high as anybody, including Scott Lidskin, who was the state runner-up my first year,” Glenbrook South coach Kurt Hasenstein said. “I’m not going to say (O’Gara) will be second (in state), but his expectations are to join an elite group of 15:00 (runners at Glenbrook South) and have the fourth or fifth best time in school history. He certainly hopes to challenge for a state-qualifying spot, if not an all-state position. His progression has shown he can do those things.”

Junior Carl Klamm returns as the Wildkits top runner, and he is looking to build off a strong track performance in which he finished 11th in the state in the 800-meter run and was part of the 4x400 relay team that came in seventh.

“Carl had a great outdoor track season, and that makes his cross country season possibly kind of exciting,” Evanston coach Don Michelin said. “He’s done some good things (in track) and done some summer work. The outlook looks real good for Carl.” Classmate Estaban Escabar was the team’s No. 2 runner at times last season. He and Klamm have been running together since they were sixth graders at Evanston’s Chute Middle School. Michelin said the pair have a healthy rivalry.