Glenbrook North overpowers Steinmetz on both sides of the ball 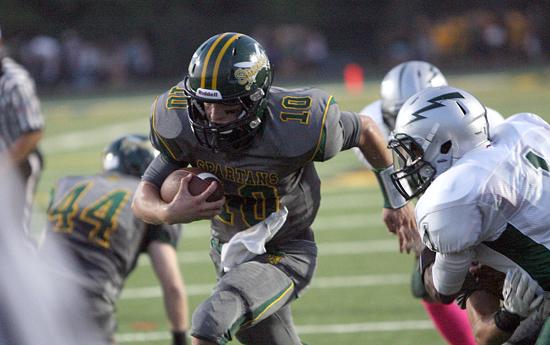 THE SKINNY: The Glenbrook North football team (1-1) rebounded from a loss to Hersey in the season opener with a 47-6 victory over Steinmetz (1-1) on Friday in Northbrook. Glenbrook North’s starters were resting by halftime as the Spartans tallied 40 first-half points.

TURNING POINT: The Spartans returned the opening kickoff to the Steinmetz 48-yard line, and then senior quarterback AJ Spitz capped-off a six-play drive with a touchdown run. Glenbrook North never looked back, scoring the first 27 points of the game.

THE STAR: Spitz was the best player on the field, executing the spread offense with precision. He finished with three total touchdowns. His pass to wideout Nick Cox for a diving catch in the end zone was the game’s top play.

BY THE NUMBERS: Glenbrook North was dominate on both sides of the ball. The Spartans scored touchdowns on all six of their first-half possessions, and had an average starting field position of the Steinmetz 35-yard line. Glenbrook North did not give up a first down defensively in the first half.