On Friday at Gately Stadium, two members of the 300-win club will coach against each other when Frank Lenti will lead Mount Carmel against Bishop McNamara and Rich Zinanni. The coaches aren't just in the same club, but have many other similarities. 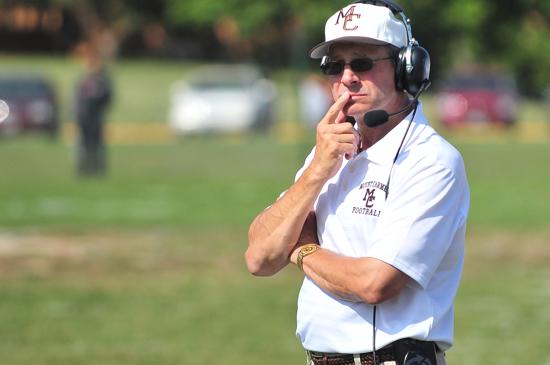 It’s one of the most exclusive clubs in Illinois prep sports with just five members.

What is it? Football coaches who have won 300 games in this state.

One interesting twist is how intertwined the quintet’s careers have been, Here’s another: two of them will be coaching against each other Friday night at 7:30 at Gately Stadium.

That’s when Mount Carmel and Frank Lenti, No. 1 on the Illinois wins list with 328 (against 59 losses), play host to Bishop McNamara and Rich Zinanni, who’s No. 3 at 310-118. The other active coach on the list is Sacred Heart-Griffin’s Ken Leonard (311-68), who was recommended for his current job by Zinanni almost three decades ago.

The retired coaches with 300 Illinois wins are Richards’ Gary Korhonen (306-91 here, 315-98 counting his time in Iowa) and Providence’s Matt Senffner (300-114-1). Both are good friends of Lenti, and Senffner and Zinanni also have ties through their schools’ Catholic League membership. (The IHSA website also lists two more coaches with 300-plus wins — Ron Holtman and Bron Bacevich — but some or most of their wins came in other states.)

As competitive as the big five all are, there’s a remarkable camaraderie among them as well.

Lenti tells a story about how he needled Zinanni and Senffner during the golf outings they went on: “I used to kid those guys all the time that they became head coaches when I was in high school and college.”

Zinanni, who is in his 39th season at McNamara, can give as good as he can take, too. “Try to get him to retire so I can take the lead,” he said of Lenti.

Underneath the jokes runs a current of mutual respect.

“Obviously he’s a great coach, probably realistically an even better person,” Lenti said of Zinanni. “One of those guys you call a pillar of the community.”

It’s not necessarily the life Zinanni envisioned when he majored in business in college. “I never dreamed I’d do this and stay here this long,” he said.

But he came back to his hometown after school, served as an assistant for a few seasons and then got the head coaching job in 1975. His resume is one for the ages: 36 winning seasons, 31 IHSA playoff berths, seven trips to the state finals and Class 3A titles in 1982, ’85, ’86 and ’87.

Those numbers say plenty, but they don’t tell the whole story.

“I think what people don’t realize is we’re at these schools for more than just football,” Zinanni said, referring to himself and Lenti in particular.

“I’ve been director of development, dean, athletic director — football is [just] a part of what I do. He’s been a teacher also; I’ve taught business classes.”

And like Lenti, who’s had opportunities to leave Mount Carmel for bigger stages, Zinanni hasn’t stayed put for lack of options. “I’ve had some good chances to go to some really nice schools,” he said.

But the question has usually been “Why leave?” rather than “Why stay?”

Zinanni recalls hosting a college buddy from Cleveland for a Mac football weekend. The friend came to Kankakee wondering why Zinanni was still there and left understanding why he’ll never leave.

“The quality of life is excellent,” said Zinanni, who is 66 and has no plans to leave the sideline.

“I don’t feel like quitting,” he said. “I enjoy it. Every year we’ll monitor it.”

The retirement rumors come with the territory for these coaches. Lenti, who turns 62 next week, has been hearing them at least since his son Frank’s senior year. That was 2002 — since then, the Caravan has gone 106-29 with four more trips to state and another title, giving him 10 championships in 15 state-final appearances.

Someday, Lenti and Zinanni will walk away. But they’ll go on their own terms, and in the meantime, they have another game to coach — against each other.