Richard Schoen burned McNamara for a scoring catch and an interception return for TD. 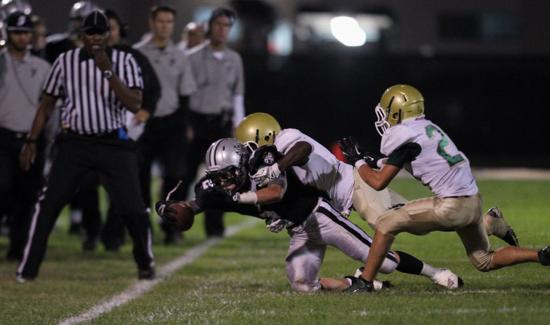 THE SKINNY
After Fenwick allowed Bishop McNamara to score first early in the second quarter, the Friars' defense was stingy the rest of the game. Bishop McNamara netted just 24 rushing yards and quarterback Jared Marcotte completed only five passes, as the Friars captured the Chicago Catholic White opener.

TURNING POINT
Bishop McNamara (2-2, 0-1) led 7-0, but the Friars responded quickly on a one-play drive when Gino Cavalieri hit Richard Schoen for a 67-yard scoring strike. Moments later, Schoen intercepted a Fightin’ Irish pass and set up another quick score for Fenwick. In less than a minute, the Friars turned a deficit into a 14-7 lead, which they would not relinquish.

THE STAR
Schoen made an impact on both sides of the ball, catching three passes for 82 yards. He added another interception in the fourth quarter and returned it 35 yards for a TD, providing the final margin for Fenwick (4-0, 1-0).

BY THE NUMBERS
Cavalieri had an impressive night as the signal-caller for Fenwick, clicking on 11-of-17 attempts and tossing four touchdowns. He connected with five different receivers and tossed scores to Schoen, Robert Spillane, Ryan Smith and Jimmy Donahue.

QUOTABLE
“We have been starting (games) slow a little bit, but we always find a way to pick it up. That cannot (continue) to happen, because we are going to find good competition out there where that is not going to work.” — Schoen