The Huskies’ girls may be ahead of coach Tom Tarrant’s five-year plan. 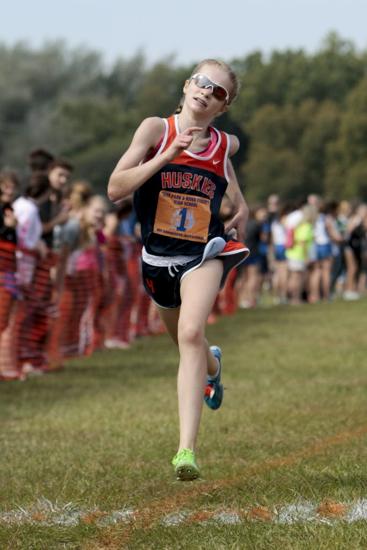 The Huskies’ girls cross country team is buying into coach Tom Tarrant’ team concept and using it to drive them downstate.

Tarrant emphasizes one thing and one thing only with his runners — it’s all about the team. Individual achievements, while nice, don’t bring teams state championships, which has been Tarrant’s goal since he took over the Huskies in 2011.

“We’ve got a strong team of runners on all levels and we’re all about pushing each other and encouraging each other. We don’t talk about who placed where or who did what,” Tarrant said. “We work together as a group.”

That includes practices as well as meets.

“We run a lot of tempos and intervals in groups,” senior Erin Schrobilgen said. “And we’re always pushing ourselves and stepping it up whenever we can.”

The results are paying off for the Huskies. They won an invitational at Marmion and finished fifth at Peoria earlier this season. On Saturday, the Huskies took second out of 17 teams, with four runners finishing in the top 16.

“I had a five-year plan set that we would be going downstate as a team by the fifth year. This is the third year and I’m hoping this is the year where it pays off,” Tarrant said.

“We’ve put in a lot of hard work and we want to get the whole team down to state, not just one or two runners.”

Fenwick junior Olivia Ryan has already had a distinguished career running for the Friars.

As a sophomore, she finished fifth in the 3A state cross country meet meet and sixth in the 2A state track meet. Over the summer, she achieved All-American honors at the Junior Olympic Track and Field championships.

“Olivia has been and continues to be a great presence on our team, not only as a competitor but also as a leader,” Friars assistant coach Kevin Roche said. “Last year, was of course, a fantastic season for her, finishing fifth place and running one of the top times at state ever. Somehow, she continues to grow as an athlete. Her workout times have been significantly better for this season.”

At Saturday’s Roy Gummerson Invitational, Ryan finished fourth overall in 18 minutes, 9 seconds. The Friars’ team placed fourth in a field of 17, including competition they will face again in the regionals and sectional.

“In terms of teamwork, she has shown great initiative by sharing her insight and experience with the other athletes,” Roche said. “She has become more vocal about sharing her goals and concerns with the coaches, which has in turn allowed us to help her improve her performance.”

With only two seniors, the Blazers are a young squad and Doyle is the best of the group.

“I did some long runs of six, seven miles to stretch myself out and I also did intervals every couple of days. It’s helped improve my speed,” she said.

All of Doyle’s hard work is part of a larger personal goal: Eclipsing 19 minutes for three miles.

“Last year I was running about 21 minutes and this year I’ve been running in the low 20’s,” Doyle said. “I’m hopeful I can get there.”

At Saturday’s Gummerson Invite, Doyle finished 50th in 21:13. It highlighted some areas where she wants to improve as she pursues her goals.

“Today I had a bit of a dip and I need to work on my second mile and keep to my pace. My first and third miles are usually faster and I need to keep working on my endurance,” she said.