The Bison use big plays, including three scoring plays of at least 54 yards, to earn the home victory 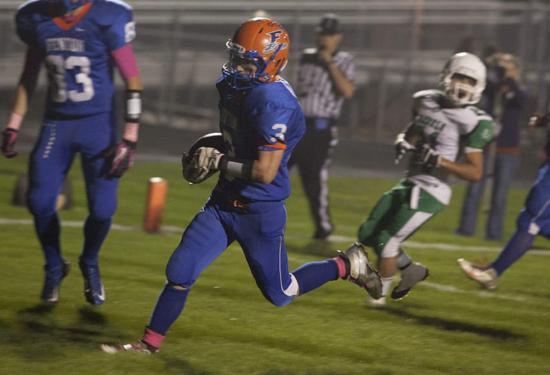 Fenton running back Alex Cowan scores the first of his three first-half touchdowns against Ridgewood on Friday in Bensenville. | Terence Guider-Shaw/For Sun-Times Media

Fenton scored on its third play from scrimmage and cruised to a big win in its Metro Suburban Conference opener at home Friday night in Bensenville. Ridgewood (1-5 overall, 1-1 conference) made two costly turnovers in the red zone and lost junior lineman Paul Iannotta to a broken left fibula in the second quarter, according to Ridgewood coach Chris Zack.

The Rebels trailed 21-0, but had moved the ball to the 17-yard line when senior quarterback Geri Aliaj threw an interception that was picked off by Fenton senior defensive back Jimmy Kramer. The Bison capitalized and scored before the half to go up 28-0.

Senior running back Alex Cowan was huge in the first half. He ran on Fenton’s first three plays, scoring on a 10-yard touchdown run three minutes in. Cowan finished the opening half with 115 yards and three touchdowns on 10 carries.

Fenton (4-2 overall) had six plays of 20-plus yards — three for scores — including a 59-yard touchdown strike from junior quarterback William Wassmann to senior receiver Zach Jakalski in the first half. The two connected again in the second half on a 54-yard touchdown pass. Junior running back Kyle McPherson capped Fenton’s scoring with a 79-yard touchdown run.

“We always want to put ourselves in control of the conference. We’re 1-0 but we’re not kidding ourselves ... We know we’ve got to get a lot better and raise our game even higher to come at Glenbard South.” — Fenton coach Mark Kos