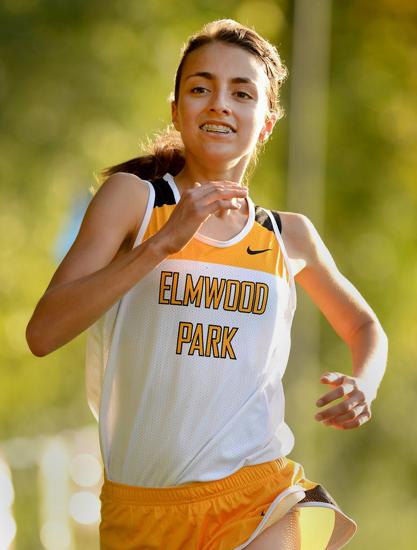 Aingel Matos is new to cross country, but the sophomore has become a key contributor for Elmwood Park.

She took ninth in the Tiger Invite on Oct. 10, completing the 3-mile home course in a personal-record 19 minutes, 45 seconds.

“I wanted to make a change and become more active, so I joined cross country this year,” Matos said. “It was hard for me the first couple of weeks. Cross country is a tough mental and physical sport, so I had to put my mind in the right place.”

Because she still is getting acclimated to the sport, Matos has plenty of potential to improve.

“I think I can definitely get into the 18s,” she said. “And by next year and senior year I really think I can be one of the top girls around.”

Matos, who has trained outside of practice with Diana Mazurek (second, 19:07), the Tigers’ top runner, is a three-sport athlete who also plays basketball and runs track.

“We met her in track, so we knew her potential,” Tigers coach John Kingsmill said. “She ran the mile and her times kept dropping. She put in a lot of work in the summer running with Diana.”

All that running has worn on her legs this season.

“I’ve been doing a lot and my legs have just been really tired,” said Beedie, who lives in Western Springs. “I was trying to push myself harder, but instead I rested for a few meets.”

After a break, Beedie looks to be in top form. She took seventh with a time of 19:43 at Elmwood Park.

“She’s starting to get healthy and this was her best race of the season,” Roadrunners coach Joe Wejman said. “That’s good because we’re heading to the part of the season where the meets start counting. This is a good time to turn that corner and find her racing speed again.”

Beedie was the second Nazareth runner to cross, finishing behind Claire Ramsey (3rd, 19:12).

“I tried to stay with some of my faster teammates and it really helped,” Beedie said. “I felt stronger.”

The Roadrunners won the meet with 51 points, beating out Morton (82) and Elmwood Park (84).

Josephs filling a role for Blazers

Trinity senior Jacqueline Josephs isn’t the fastest runner on the Blazers, but the River Forest native is the glue that helps hold the squad together.

“Jacqueline is probably the most positive member of our team,” Blazers coach Renee Koziol said. “She always has a smile on her face. She brings that positive energy to practice every day.”

Josephs, who took 64th at the Elmwood Park invite in 22:55, knows her job isn’t to win, but impact the team’s scoring in other ways.

Josephs has improved this season with some family training. Every morning she runs two miles with her dad Brian Josephs.

“It’s a lot of fun and my dad and mom have been coming to my meets since I was in the fifth grade,” Josephs said. “I think it’s definitely beneficial when you run in the morning and then again at practice.”

Emily Schader saw something special in freshman Jasmine Salvador, so when the Leyden coach learned that teams could enter nine runners in the Tigers Invite varsity race, she didn’t hesitate to give Salvador a chance.

Salvador responded by beating two varsity regulars and taking 51st overall and seventh on the team in 22:01.

“I put her in this race because I had the feeling she could really step up when challenged,” Schader said. “She’s been holding back in other meets just because I don’t think she knew how to run. But she had a stellar race.”

“I was really nervous because I didn’t think I could keep up,” she said. “We’ve actually run this course before, so I knew where the soft spots were so it wasn’t as hard as other races.”

Salvador finished the race strong, passing three runners down the final stretch. Her solid performance gives Schader something to think about when she decides on seven runners for her lineup at Saturday’s West Suburban Gold meet in Willowbrook.

Despite being limited by injuries from entering the varsity race at Elmwood Park, Guerin received a lift with the return of Mary Jo Toohey.

The senior competed in the JV race, which was her first competition of the season due to tendinitis in her left knee.

“I didn’t want to put too much pressure on myself,” said Toohey, who lives in River Forest. “Once I started racing I couldn’t feel any of my knee problems. It felt pretty good today. It was good to be back out there.”

Toohey, who began noticing problems in August, has had a tough time dealing with being unable to compete with her teammates.

“It’s been hard seeing everyone run,” she said. “I really like the competitive aspect. I’m glad that I’ll be able to do that the rest of the regular season and in the postseason.”

Toohey’s goal coming into this season was to qualify for the state meet. With getting such a late start, Toohey knows that will be an uphill battle. The Gators compete in the 1A Aurora Christian Regional on Oct. 27.

“At the beginning of the season I definitely had a higher aspiration,” she said. “After this, it’s going to be hard to get there but I’ll try my best to see what I can pull off.”