Girls tennis taking off in the Public League

There's been a spike in interest in girls tennis around the Public League this season, and at Ag. Science, new and experienced players alike have competed for coach Mary McGeehan. 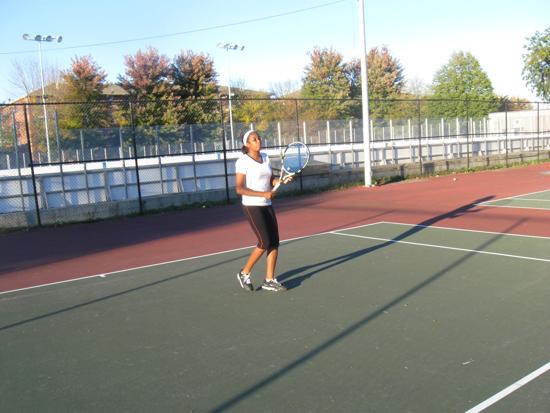 Mary McGeehan found a pleasant surprise waiting for her earlier this summer.

When the Ag. Science girls tennis coach arrived at the school’s first tryouts of the season, she expected around seven players to be there. That’s how many players the team had last year. But in 2013, McGeehan found twice that many students on the court, excited for the season.

She was not alone. Around the city, CPS schools have seen a rise in interest in girls tennis. Though the city doesn’t release official numbers of how many players yearly participate in a sports, several programs say their rosters have grown in recent years.

McGeehan believes that many of the players choose tennis as an after-school activity because of its no-cut policy, unlike sports such as volleyball. However, the rising interest in tennis also coincides with more youth programs in the city getting kids at the lower levels involved with the game.

Ag. Science senior Kayla Lang has been playing tennis since she was in fourth grade. That type of experience is uncommon, both among her teammates and her opponents.

Lang said she plays tennis because, “I enjoy the challenge. When I come right out after school and hit the court, I feel better, and I think I play better.” However, she knows that few of the players she competes against know as much about the game as she does.

“Some teams we play, they just don’t know all the rules or how to keep score or some of the sportsmanship of the game,” Lang said. “It’s great more girls are getting into tennis. I feel like more girls should give tennis a try, it’s great when you just give it a chance.”

While McGeehan has some girls on her team who are experienced in the game, the rise in new players has meant more going back to basics. The coach said she has taught more fundamentals to this team, who will compete in the Stagg Sectional on Saturday.

That doesn’t meant the team won’t be well prepared. McGeehan has high hopes, especially for Faith Johnson and Samantha Peron, her top two singles players. Johnson and Peron are products of youth programs at CPS grammar schools, which improves the play at the high school level.

“There’s not a ton of pressure here. We want our girls to learn the game and have fun,” McGeehan said. “We seem to have more interest now, and that’s great.”