Glenbrook North's Brian Ohr sank a birdie putt on the 18th hole to hold on for a 1-stroke victory at the Class 3A state finals on Saturday. Kenneth Li finished second to key Hinsdale Central to the team title. 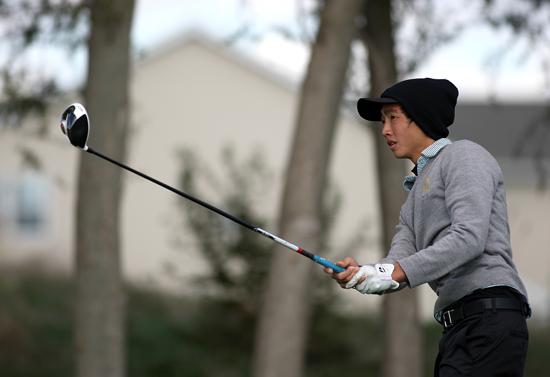 BLOOMINGTON — The crowd surrounding the 18th green at The Den at Fox Creek was growing. They'd come to see Glenbrook North's Brian Ohr attempt a tournament-clinching birdie putt from 5 feet.

Before addressing the ball, Ohr saw his father, who also is named Brian Ohr, in the background with his camera ready.

"I saw him smile at me," the younger Ohr said. "For some reason, I had no nerves then. It gave me a lot of confidence knowing he believed in me."

The Spartans senior steadied his hands and rolled in the putt for a 1-over 73 Saturday that delivered him a one-stroke victory and the Class 3A boys golf state championship.

Ohr finished the tournament at 3-under 141, which was one stroke better than Hinsdale Central sophomore Kenneth Li, who shot the day's best round of 70.

"Those have been my bread and butter all season," Ohr said of the putt's distance. "I had no fear stepping up to that putt."

His drive off the tee traveled nearly 300 yards uphill and settled in the fairway. He followed that with a SportsCenter-worthy wedge from 108 yards to 5 feet.

Less than an hour earlier, however, Ohr was falling apart.

Leading Li by four at the turn and at 8 under for the tournament through 10 holes Saturday, Ohr suddenly was in a tailspin on the back side, where wind gusts were strong enough to blow hats off of heads and shake the confidence of many players.

After his bogey at No. 16 — his third in a row — Ohr stood at 2 under and trailed Li by one. Ohr met up with senior teammate Nick Hardy on the par-3 17th tee box.

"Nick gave me a very good pep talk because I was feeling down," said Ohr, the program's first state champion. "I really have to thank him for that. It got me going. He was so unselfish, and he wanted the best for me."

Ohr, who watched Li bogey the 17th, hit his 6-iron on the 160-yard hole safely onto the fringe. Ohr then two-putted for par to get even with Li.

"The way he won it was unbelievable," Hardy said. "If not me, he's the person I would have chosen to win it."

"It's hard to win one, and it's harder to repeat," Hinsdale Central coach Jess Krueger said of the school's fifth state title in boys golf. "We couldn't think about that.

"We grinded. There were not a lot of good scores out there."