Since David Gonzalez took over the Thornton program, the team has had a lot of success. That success was punctuated this year as the Wildcats finished the SouthWest Suburban Red season undefeated and as outright champions. 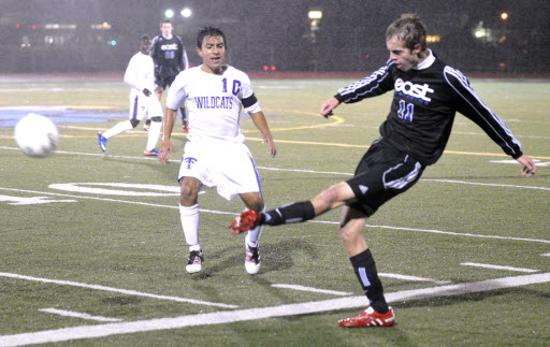 To say that Thornton Township’s soccer program was in a shambles when David Gonzalez took over as head coach four years ago would be an overstatement.

The Thornwood alum, however, has without question brought the program up to a standard that it hasn’t enjoyed in some time.

His first order of business was getting the numbers up enough that the program could field teams on three levels instead of two. Within a year it happened.

Next was getting Thornton a competitive swagger that it was lacking since it joined the SouthWest Suburban Conference in 2006.

Last season, his third as the head coach, the team tied Stagg for first place in the SouthWest Suburban Red division.

Tuesday, Thornton co-op, at 16-2 overall and 6-0 in league play, stood alone as the undefeated Red champion after defeating Lincoln-Way East 4-2 at Brigges-Ellis Park.

“It’s pretty big,” senior Francisco Carbajal said. “We all wanted it and were working really hard to win this one for ourselves.”

One of the neatest things about this success story is that there are 15 kids from Thornwood, seven from Thornton on the co-op roster.

The rivalry between the schools in sports like basketball and football is, shall I say, pretty intense. But on the soccer field Thornton and Thornwood, Harvey and South Holland, and ethnic backgrounds that include Nigeria, Liberia, Benin, India and Latin America are a united entity.

“We treat each other with respect,” Carbajal said. “We don’t look at each other like we’re from different schools. We all grew up together playing on our club team.

“We don’t feel, ‘Oh, you’re from this school, or that school.’ We all feel like we’re from the same place. We’re all brothers with each other in one big family.”

A few statistical facts about this team.

The leader is senior Emmanuel Barjebo, who is among the area’s elite with 20 goals and 18 assists. Teammate Farouk Amoo had 17 goals and four assists and Ricardo Estrada nine goals and 14 assists.

Here’s another number. Senior Jesus Fernandez is No. 1 in his class. Several teammates take AP classes.

“The good thing about the guys I have is that they’re very, very smart, not only on the field, but in the classroom,” Gonzalez said.

Gonzalez was a four-year midfielder at Thornwood from 1996-99. In 1999, the Thunderbirds went 20-1, losing to Marist in a sectional championship. He went on to play at South Suburban College.

After college, Gonzalez served as an assistant coach at Thornton and then T.F. North, before returning to Thornton in 2010.

Thornton, meanwhile, was among the elite in the old SICA East conference, winning titles in 2003 and 2005. But the switch to the SouthWest Suburban conference brought a new level of competition.

In Gonzalez’s first season the co-op team was fifth out of seven teams in the SWSC Red. His second year, it was next to last.

The program was growing, however, thanks in part, Gonzalez said, to Thornton athletic director Bill Mosel’s enthusiasm about going back to three levels.

“We thought it could be a viable program within the district,” Mosel said. “But it had to be built through the lower levels.

“There was a concern whether we could get the numbers, but he did a good job of getting the kids out. They’re doing a great job. I’m really proud of them.”

And it will probably get better.

The Harvey park district also has started a soccer program.

“That’s where a shift is going to come in the Thornton/Thornwood ratio,” Gonzalez said. “Because of the Harvey park district team we’re going to have a lot more kids coming out of Thornton.

“We’re going in the right direction, that’s for sure.”