Huskies' freshmen making their marks in swimming and cross country. 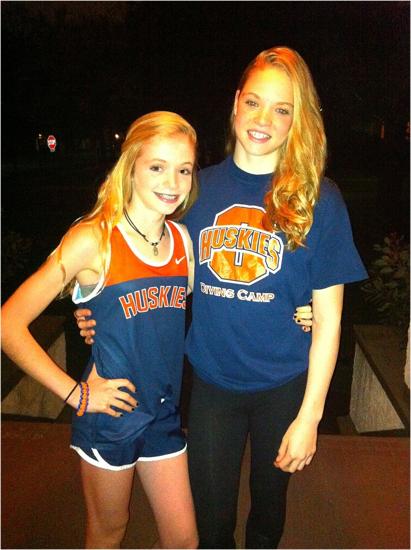 Oak Park-River Forest freshman Mary (left) has been a top runner for the cross-country team, while twin sister Hanna Blankemeier set a school swimming record with the 400 free relay. | Courtesy of the Blankemeier Family

Hanna and Mary Blankemeier are freshman twins at Oak Park-River Forest, but they don’t look alike nor do they like to participate in the same sport.

On Saturday, however, the twins competed at the same time, which made for quite a busy day for their parents William and Julie Blankemeier.

While Mary was competing in the West Suburban Silver girls cross country meet at Proviso West in Hillside, Hanna swam at the annual New Trier Relays in Winnetka.

Both Hanna and Mary Blankemeier agree that it’s good that they’re in different sports.

Hanna Blankemeier said: “We do not get competitive with each other.”

Mary Blankemeier said: “It’s not fun to be a competitor with each other. It’s more fun to be 100 percent of the time on our own.”

Before entering high school, the twins played soccer and basketball, but for Hanna the pool was always more interesting. Both enjoyed successful careers before OPRF.

Mary Blankemeier’s running career included state championships at the youth level in both cross country and track and field, according to an article in Chicago Athlete. The same publication reported that Hanna Blankemeier won her own youth state championship in the 50-meter freestyle.

In Mary Blankemeir’s conference meet debut at Proviso West on Saturday, she placed 21st. She had been OPRF’s top finisher, but senior Erin Schrobilgen led the Huskies to fifth place at the WSC Silver meet by placing ninth in 18 minutes, 48.2 seconds.

Schrobilgen has mentored Mary Blankemeier, who is in position to take over next season as the school’s top runner.

The twins started running 5K runs as kids with their mom, but they eventually followed different pursuits.

“I like to forget (things) when I’m out there racing,” said Mary Blankemeier, who will compete in the Class 3A Fenwick Regional on Saturday. “It clears your mind.”