Rick Armstrong breaks down the first round playoff matchups for a Beacon-News area best 11 teams to appear in the postseason. 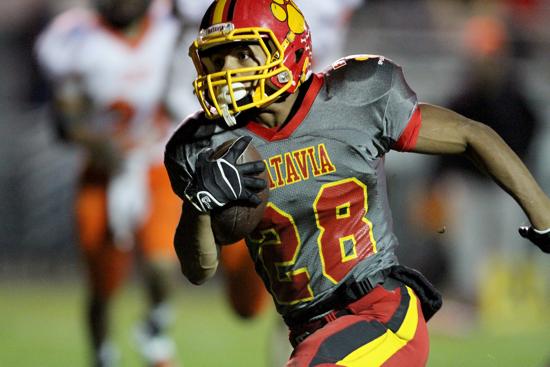 There weren’t any shockers, but certainly some surprises when the IHSA football playoff pairings were announced Saturday night.

It started with Yorkville making the field for the first time since 2002.

Karl Hoinkes didn’t have to crunch the numbers to know his Yorkville team would be cutting it close with a 5-4 record and 38 playoff points (opponents’ wins) as their tiebreaker. That’s why he didn’t schedule a team gathering to watch the show on television.

“I didn’t want them to be disappointed,” he said of his players, who knew full well the Foxes haven’t made the postseason since 2002.

Yorkville will play in Class 6A against top seed Richards (8-1). Two 5-4 teams with 36 points made the field of 256, which is divided into eight classes. Yorkville was the last of 11 in the Beacon News circulation area to make it. That’s an area best. Ten teams made it in 2011.

Oswego East is in its ninth year and made it for the first time.

“They’re excited,” coach Tyson LeBlanc said of his history-making players. “Just to be in is exciting. Now, it’s about getting to DeKalb (and NIU’s Huskie Stadium where the finals will be held in five weeks.)”

Two-time defending state 3A champ Aurora Christian, which limped into the playoffs with three losses in its last four games thanks in part to a rash of injuries. The Eagles drew SCC Blue rival Immaculate Conception, a second-round playoff foe last year.

“We both know each other very well,” Aurora Christian coach Don Beebe. “We got our tails whipped (48-6 in the regular season). From a mental standpoint, we’ve gotta put that game away.”

Waubonsie Valley will play Naperville North in its Class 8A opener.

“I thought it might be North when the IHSA posted the points, but I was a little off on the rest of the bracket. I thought we might get Neuqua Valley in the second round if we both won (in the first),” Warriors coach Paul Murphy said. “Some of our kids probably know (Naperville North) kids but we have never played in my nine years here, and I don’t think the teams have met since a historic playoff game in 1992.”

Batavia’s drop to 6A caught coach Dennis Piron off guard.

“We thought all along we were gonna be one of the smaller teams in Class 7A but it didn’t fall that way,” he said of his 8-1 team’s designation as a No. 2 seed with an opening draw against DeKalb (5-4).

“It brings us back to our roots when the Western Sun broke up a couple years ago and DeKalb was a part of that league. I always enjoyed those rivalries.”

Route 34 neighbors and arch rivals Plano (8-1) and Sandwich (5-4) drew a first-round matchup in Class 4A. They met in Week 3 and Sandwich prevailed 24-20 but then fell to 2-4 and had to win out the last three weeks to make the field. Plano, under first-year coach Brad Kunz, went on to run the table.

“I was really surprised,” Sandwich coach Dusty Behringer said. “I thought for sure we’d be heading to Chicago to play Payton. The team was together at the school watching the show and the library erupted when they announced it.”

Kunz said many friends didn’t think it would happen but the potential matchup “was always in the back of my mind. The kids were really excited when it was announced.”

The two neighbors have never met in the playoffs before, said Behringer.