Athlete of the Week: Kelvin Jones

One year after an 0-9 finish, Romeoville rolls into the playoffs on a high note. Behind junior quarterback Kelvin Jones (340 yards passing, three touchdowns, TD run), the Spartans defeated Minooka in a must-win game Friday. For his efforts, Jones is the Sun-Times Athlete of the Week. 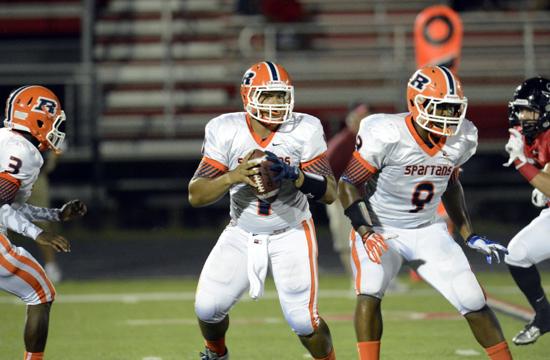 In a must-win game at Minooka last Friday, the Romeoville junior passed for 340 yards and three touchdowns as the Spartans won 34-21 to complete a remarkable one-season turnaround.

A year after finishing 0-9, Romeoville (5-4) is headed to the IHSA playoffs for the first time since 2002. The Spartans will play at Rich CentralFriday at 7 p.m. in Class 6A. For his role in the victory that sent his team to the postseason, Jones is the Sun-Times Athlete of the Week.

He also ran for a touchdown on his only carry of the game, putting his 5-10, 230-pound frame to good use in powering over from a yard out.

Indeed, Jones knows he doesn’t fit most people’s idea of what a quarterback should look like.

That’s been especially true during the Spartans’ run. Sitting at 3-4 after Week 7, Romeoville needed to win out just to become playoff-eligible. The Spartans knocked off fellow qualifier Oswego East 21-14 in Week 8 as Jones hit junior Charles Hunter with a 19-yard touchdown pass on a fourth-and-nine play in the third quarter. Then came the Minooka victory, in which Hunter had scoring catches of 75 and 51 yards en route to a 248-yard receiving night.

That meant a lot, even beyond the postseason implications.

“We haven’t beaten them in so long,” Jones said.

But the Spartans did it by riding Jones’ strong arm. “Minooka came out Friday night, they were going to take our run game away,” Kuna said.

So Jones and Hunter went to work. “We’re confident,” Jones said of himself and his receivers. “We have really good chemistry.”

Jones has grown into his varsity role after playing on the sophomore team most of the last two years (he saw limited varsity action last fall).

Aiding in Jones’ development has been Romeoville’s shift to a pro-style offense. “It fits the rest of the personnel a lot better,” Kuna said.

It’s all added up to an increasingly productive season for Jones. He hasn’t thrown an interception since Week 5 and is 78-for-174 for the season for 1,332 yards with 16 touchdowns.

“He’s got a good arm,” said Kuna, which is why he’s playing quarterback and not somewhere else.

“If he wasn’t our quarterback, he’d probably be starting at linebacker,” the coach said.

Jones seldom runs by design, because he’s been so effective as a passer. But his size presents problems for opposing defenders if he does scramble.

“You’re not going to be able to grab him by the shirt and pull him down,” Kuna said.

In fact, nothing is bringing Jones and the Spartans down these days.