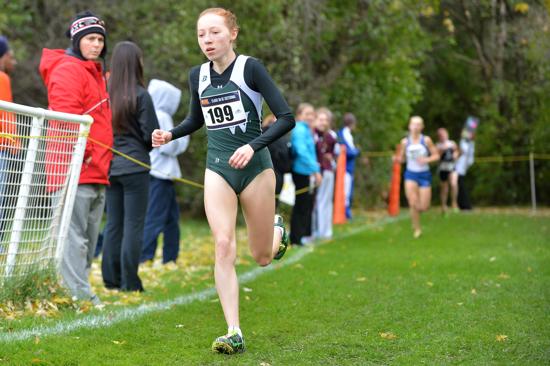 Funny things can happen in the cross country postseason, which is why Madeline Perez took her strategy pretty seriously on Saturday.

"I just kind of went into the race hoping to execute my plan whether there were other girls there or not," the Glenbard West senior said.

"I was ready for anything. You never know what anyone's going to try on any given day."

On this day, no one tried to go with Perez when she made her move in the Class 3A Lake Park Sectional at Lake Park's East Campus. Not that it would have mattered much. The defending state champ made her early lead stand up and won comfortably with a time of 16 minutes, 45 seconds.

"My main goal was just to try to run out there, push myself the first mile, be ready [for challenges] from there on out," Perez said. "My main focus was on my team."

And she was a winner on that count as well. The Hilltoppers, ranked second in 3A by DyeStatIl.com, outdistanced No. 3 New Trier 30-76 for the team title. They advance to the 3A state meet next Saturday in Peoria along with No. 19 Oak Park-River Forest (141), unranked Maine South (188) and No. 23 Loyola (205), which edged No. 18 St. Ignatius by a point for the final qualifying spot.

"We definitely saw improvement," Hilltoppers coach Paul Hass said. "We know state's going to be fast. If we're going to compete at the level we want to compete at, we have to get out and maintain."

That's no problem for their leader, even though Perez is just three races into a season that started late because of a nagging leg injury.

"It feels good to just get back into that rhythm," Perez said. "Every week has gotten progressively better as far as shaking off the rust and getting back into my routine — and mojo, I guess."