Senior running back scores four touchdowns in one half as Scouts advance. 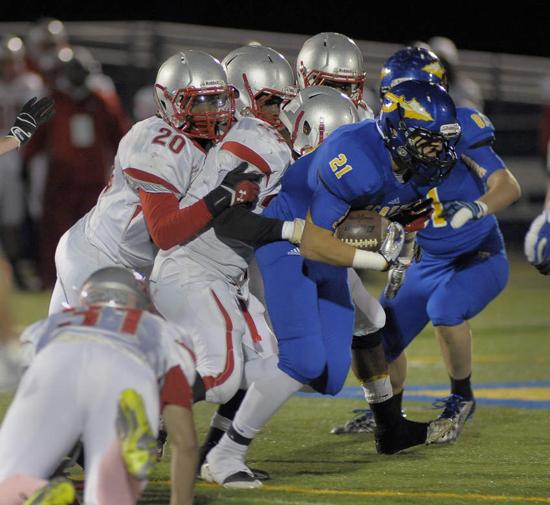 Lake Forest (8-2) scored three touchdowns in a 1:50 span of the second quarter to take a commanding 34-0 lead at the half of this Class 6A playoff matchup Saturday. Hub Cirame took a screen pass 48 yards behind a wall of blockers for the first score, which was followed by a 44-yard burst up the middle by Jack Traynor and then a Cirame 8-yard reception in the corner of the end zone.

Hubbard (6-4) drove into Scouts territory twice in the first quarter of a scoreless game. The initial drive ended on the first of safety Jack Yale’s two interceptions. The second ended on a turnover on downs. Lake Forest then drove for its first touchdown, a 1-yard run by Cirame.

In one half of play, Cirame scored four touchdowns (1-yard run, 48-, 8- and 33-yard receptions). He finished the contest with four receptions for 94 yards while carrying the ball 10 times for 59 yards. He turned his ankle while running back the opening kickoff of the second half and did not return.

“I just rolled it (right ankle) a little bit on the kickoff. I’m fine. Just a precaution (sitting out). It was definitely a fun game.” — Cirame