Gene Chamberlain takes a look at this week’s sectional volleyball action, including the Class 3A Burlington Central Sectional. 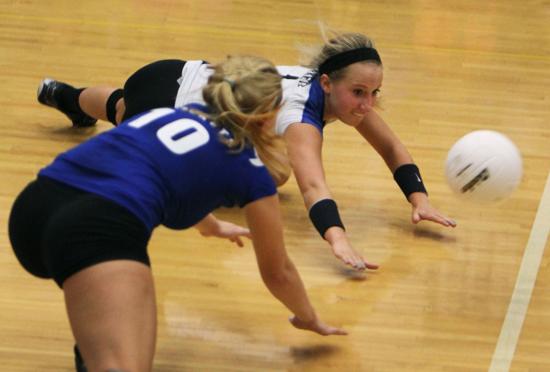 It’s all about facing tougher competition at the sectional level in postseason volleyball, and Burlington Central believes the gauntlet it went through this year provided proper preparation for what is to come.

The Rockets host a Class 3A sectional, while Elgin’s Harvest Christian goes across its property line to Westminster for a 1A sectional this week. Both teams are hoping tougher nonconference schedules put them in a position to advance to the supersectional level.

“We played in some hard tournaments, and it’s hard to sit there and get beat by 4A teams, but in the long run we’re so thankful,” Central libero Allie O’Reilly said. “We knew that it helped us.”

The Rockets haven’t played the other sectional teams, but certainly have played teams from bigger schools, and better teams in many cases.

They played at the Geneva tournament against Joliet Catholic, the host Vikings and DeKalb, and at Elk Grove, Fox Valley area power Crystal Lake South and Barrington. And their final tournament just before regionals was at Lincoln-Way Central where they went 2-3, beating Oak Lawn and Andrew but losing to Lincoln-Way Central, T.F. South and Plainfield Central.

“It’s going to be great playing on our home court,” Burlington Central middle Makenna Jensen said. “The whole school has been behind us (at regionals) and it’s going to get even better at home.”

The Rockets are a perfect 8-0 at home this year.

Harvest Christian (26-11) and Sydney Doby rolled over inferior competition the past two years en route to the sectional title, winning in two sets in every match and never giving up more than 18 points in any of them.

It figures to be much different this time around because Newark (27-6), Tuesday’s 7 p.m. opponent, offers a powerful challenge. The teams had common opponents in Ottawa Marquette and Aurora Christian. Both Harvest and Newark won those matches. Both needed three sets to beat Aurora Christian, and Harvest had a slightly easier time beating Marquette.

North won the first match-up vs. East 25-17, 23-25, 25-22 behind 16 kills from NIU-bound Taylor Krage. The Saints rebounded, and both teams shared the Upstate Eight River title at 5-1. North has won 14 straight matches, including invitational crowns at Schaumburg and Minooka. East, led by setter Carly Jimenez, has won five straight, including big victories over Waubonsie Valley and Geneva before rallying for the York Regional crown Thursday.

Huntley is in its fourth sectional in six years, but hasn’t won a sectional title since 2001. The Red Raiders (24-13), led by libero Rachel Shores, face Warren (24-13) at 6 p.m. Tuesday at Belvidere North. Rockford Boylan and Crystal Lake South square off at 7 in the other semifinal.