Emily Doyle and Erin Nelson will have company in Peoria for the Class 2A state cross country meet. 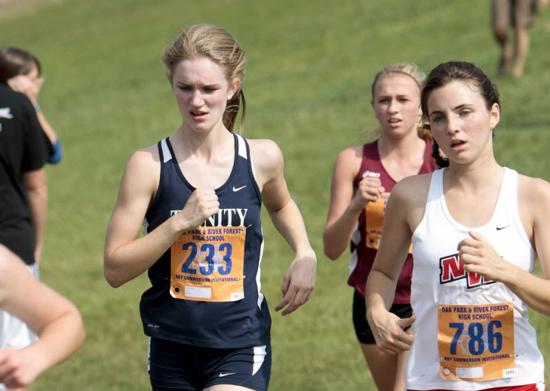 Trinity’s Emily Doyle, competing in the Roy Gummerson Invitational meet at Schiller Woods, guided the Blazers on Saturday to their first trip to the state meet. | Michael Jarecki/For Sun-Times Media

The message was simple: Pass as many people as possible.

So Mary Bea Halloran did. The No. 5 runner for Trinity’s cross-country team followed her coach’s orders, ran a personal-best three-mile time at the IHSA sectional meet despite the course being 3.05 miles long and secured the Blazers’ first team trip to the state finals in school history.

“I knew there was more on the line and I knew I could push myself a little harder,” said Halloran, a sophomore in her first year of competitive running.

Trinity missed qualifying for a state as a team by four points last season, and it would have likely been on the outside looking in once again if not for the strong showing by its fifth runner.

Halloran and freshman Sara Doyle have shared ownership of the fifth spot for much of the season, with Doyle placing fifth for the Blazers the previous week at the 2A Lake View Regional. Yet on Saturday, Hallorah found herself without her running mate and proceeded to charge ahead.

“When I didn’t see her up by me I knew that I had to go a little bit faster and I had to push myself a little bit more because I didn’t know where she would be,” Halloran said.

Halloran’s efforts, along with the finishes from her four teammates, proved enough to qualify 29 points ahead of Resurrection (155) at the Chicago U-High Sectional at Washington Park.

Sophomore Emily Doyle — sister of Sara — paced the Blazers (126) with a 20-minute, 15-second showing and placed 14th overall for the Blazers, who finished with 126 points. Junior Tatiana Nieves followed with a time of 20:26 and came in 18th, while sophomores Paige Jaffe, Erin Nelson and Halloran finished 25th, 26th and 43rd, respectively.

“They ran just unbelievably,” coach Renee Koziol said. “There was a big pack up front for our first four runners and then our fifth runner also had a solid performance.”

Koziol, now in her third season at the helm of Trinity’s cross country program, has seen her team improve each year. The Blazers finished 13th at sectionals in her first year and sixth in 2012 before finally making the leap this season.

Much of the team’s recent success, Koziol said, should be credited to Emily Doyle and Nelson, who both qualified for state individually last year as freshmen.

“Their leadership and their commitment to the sport, it’s exemplary,” Koziol said. “It’s really changed the program this year. They’re very passionate and it’s infectious to the entire team.”

Halloran said her teammates’ experience would be beneficial when they compete at Saturday’s state meet on Saturday in Peoria. Detweiller Park is as flat as any course in Illinois and has a reputation of summoning personal-best times from those who run on it.

“It helps,” Halloran said, “because they’ve been there and they’ll tell us what to expect with the atmosphere and the course and things like that.”

No matter the course, the goal will be the same as Trinity heads south to compete with the best 200 runners in the state. The Blazers have no control over how their competition fares. All they can do is pass as many people as possible.

Paced by senior Diana Mazurok, who took sixth in 19:52, Elmwood Park placed fourth at the University Sectional and advanced to the 2A state meet.