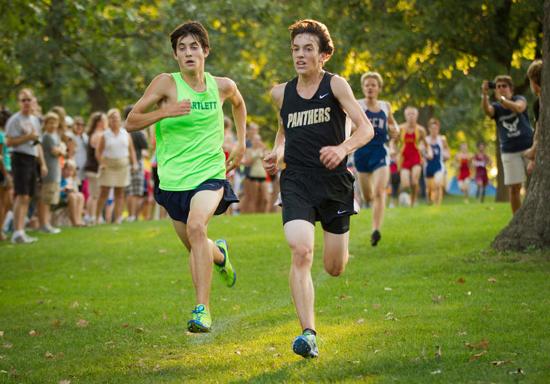 Cotton’s goal is all-state status and a top-25 medal while the Lions have already exceeded expectations and are out to make it their best race of the year at state.

“Last year I didn’t even run at regionals because I had pneumonia,” said Cotton, the Hawks senior who took sixth overall at sectional in 15:41.

Cotton tried to run at sectional with the illness.

“I got it because we had really bad weather three weeks in a row in races and it was rainy in practices,” he said. “It was just like, so many practices in a row in bad weather and I got a cold and then pneumonia.

It still wasn’t good enough for state by about 23 seconds. So Cotton’s season ended.

In spring he came back strong and finished 19th overall in the Class 3A 3,200 meters.

Now Cotton will run state cross country for the very first time, although he has run the course in the past because Bartlett annually competes at Peoria Notre Dame’s invitational.

“It’s been his goal all season to break 15 minutes, and do it to make all-state,” Bartlett coach Ryan Korn said. “I think he’s got a little bit left to do it. He’s been close to it a few times this year but at Waubonsie Valley in sectional no one was even close to that.”

Although Cotton has been at Detweiller, it’s going to be entirely different for him at state because the pace at the outset is like a sprint. It’s unlike anything runners can experience in regular season. It can easily throw off a runner’s pace.

“He’s a really smart kid,” Korn said. “He analyzes his races more than most kids and nitpicks the course so when we talk he’s always telling me what he’ll do and makes a detailed plan. He knows how he has to run this.”

For Harvest Christian’s team in the 1A meet, the problem is similar.

The school’s team has never been to state, never run a pace so frantic at the outset.

“One thing we’ve talked about is starting off the meet smart, not getting caught up in the euphoria,” Harvest coach Steve Bland said. “You go into oxygen debt too fast.

“We always preach a more conservative approach anyway. It’s sort of our calling card, and while others are fading hopefully we’ll be moving forward.”

Harvest Christian won the Northeast Athletic Conference title, but failed to run a race close to what they thought was their potential.

The same held true at regional, and even sectional. Bland and his team thought they were finished at sectional.

They sat around awaiting the awards ceremony and were stunned when times were posted and they beat out Timothy Christian by 13 points for the last qualifying spot.

“We don’t have unrealistic goals; we just hope to establish a legacy for our cross country program building toward next year,” Bland said.