After losing in Friday’s 2A semifinals on penalty kicks to St. Ignatius, Wheaton Academy lost the third-place match 2-1 Saturday to Rochester. 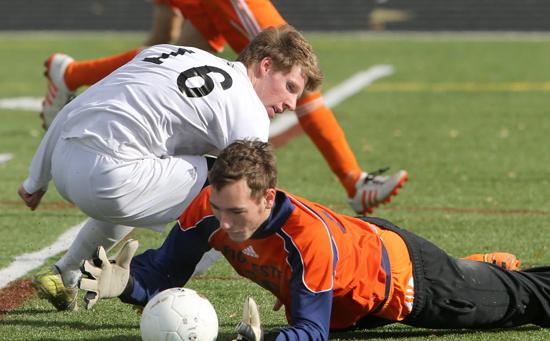 Wheaton Academy qualified for the state semifinals in back-to-back seasons for the first time, an accomplishment most schools would love to achieve.

As for the results, though, the Warriors would like to give those back.

For the second straight year, Wheaton Academy’s quest for its first state title ended with a pair of excruciating defeats that were carbon copies of one another.

After losing in Friday’s 2A semifinals on penalty kicks to St. Ignatius, the Warriors (22-5-1) lost the third-place match 2-1 Saturday to Rochester. It was the same scenario as last season, when the Warriors lost on penalties to Peoria Notre Dame in the semis and to St. Viator in the consolation match. All four games were 2-1 defeats.

“We were fighting today just to try and create some momentum but just weren’t able to do it,” said Wheaton Academy coach Jeff Brooke, whose squad lost consecutive games for the first time this season. “We wanted to do better than last year but it was like an exact repeat: a shootout loss and a 2-1 loss. But a lot of people would like to be here and we’re thankful for the work the guys did to get here.”

The Warriors were exhausted after Friday’s marathon loss and it showed as Rochester (22-6) scored twice in the first half. Austin Bell gave the Rockets the lead in the eighth minute when he took advantage of some confusion in front of the Warriors’ net and scored out of a scramble in front. Cooper Fields made it 2-0 on a header off a J.D. Pletsch cross in the 36th minute.

“We played 100 minutes yesterday and a lot of our guys didn’t make a lot of subs, so a lot of us have 100 minutes of play on our legs from yesterday,” Wheaton Academy senior Sam Hardy said. “Also, getting used to this 25 mile per hour wind whipping across the field, where I tried playing a ball in the corner and it ends up in the middle of the field, was tough.”

But the Warriors didn’t go down without a fight, playing much better in the second half. They pulled within 2-1 with 22:20 remaining when Hardy launched a 35-yard free kick into the wind that went over Rochester goalie Tyler Schlecht’s head and off the head of Rockets’ defender Dawson Ford into the net.

Wheaton had a few more chances but came up empty. The best was a 25-yard free kick from Hardy that went just over the crossbar with 12:20 to go.

“We couldn’t get the ball in the net there at the end,” Hardy said. “We were close a lot of times. I’m glad that we came out and showed that we can play better soccer than we did in the first half. Sadly, it wasn’t good enough, but we tried.”

Wheaton will graduate nine seniors, including six starters, from a team that won 43 games over the past two seasons.

“It was great going [to state] back-to-back with this group of guys,” said Hardy, who will play at Taylor University. “Some of us have been playing together since Wheaton Christian [grammar school] days. We’ve all been a tight-knit group of guys, always there for each other and all these underclassmen are great guys, really bought into what Jeff’s trying to do here.”