Kassie Aldridge went from a shy sophomore setter to senior leader for Coal City. Along the way, she led the Coalers to some of their most successful seasons, including a 23-win season this year, the highest win total since 1994. 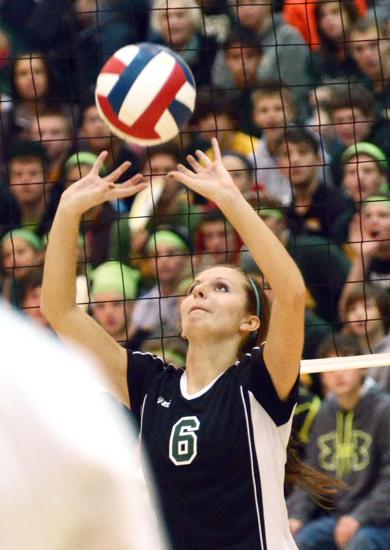 Kassie Aldridge is pretty honest when it comes to her on-court strengths and weaknesses.

Hitting? Not her thing.

Setting? She’s right at home, and the results certainly showed.

“Hitting really isn’t a strength for me,” Aldridge said with a laugh before a recent match. “I’ve always set. I’ve put in a lot of time with club, so the reps and competition, everything really, it has definitely helped.”

Aldridge, a senior at Coal City, started as a setter in sixth grade and never switched. By her sophomore year with the Coalers, she was called up to the varsity and immediately played.

From sophomore year through her junior and senior seasons, Aldridge was a fixture in the Coalers lineup. The on-court play was one thing though, the confidence to know she could do it a work in progress.

“I didn’t want to step on any toes as a sophomore,” Aldridge said. “I’d say I wasn’t much of a leader that year. That’s been a big thing for me this season. I know my role (now) and what I’m supposed to be doing.”

Coal City coach Michael Lanoue has seen that transformation. From a timid sophomore setter leading the offense to a calm, collected senior, Aldridge has done a 180.

“The transition over the years was pretty good, a learning curve, but she transitioned well,” Lanoue said. “Now, I think her expectations of herself are higher than mine are of her.”

Over her three seasons on the varsity, Aldridge was a part of 56 wins for Coal City, including 23 this season as the Coalers advanced to the sectional for the first time since 1994. The 23 wins were the highest for the program since ’94.

With Aldridge (679 assists) leading the offense and spreading the ball around, the Coalers were one of the area’s most balanced offensive teams. Emily Halliday (261 kills), Claire Smith (197), Britta Spelde (133) and Nicole Borgetti (79) were the main targets of Aldridge’s sets.

Where does Aldridge attribute the success? Yeah, the hours of practice help, but it’s more than that. The six-member senior class has been playing together since grammar school.

“There’s no drama with the group, and that’s a big thing,” Aldridge said. “A lot of teams struggle with that. We’re really close. I try to spread the ball around as much as I can. We have a really strong offensive team, and I know I can count on them to get the ball down.”

With her Coal City volleyball career over, Aldridge can focus on the future, with North Central College expressing interest in the 5-foot-8 setter.

“It went crazy-fast, and I’m going to miss it,” Aldridge said. “I love knowing what’s going on and controlling where the ball goes. I love setting.”