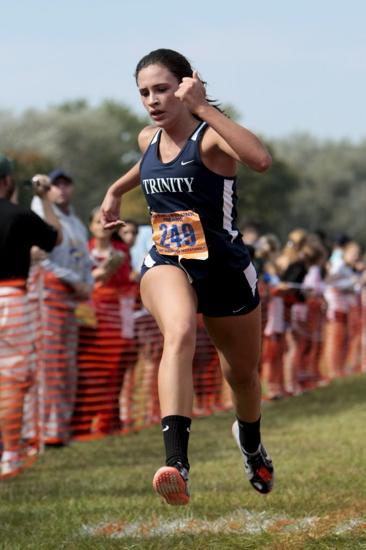 The Trinity cross country team was not shocked by its finish at Saturday’s IHSA 2A state meet.

It wasn’t a matter of low expectations; the Blazers simply understood their standing among the rest of the 24 teams competing.

Two days prior, at the home of Emily and Sara Doyle, the team took a recess from its pasta feast and ascended the stairs to a vacant room with a white board, where they projected their potential finishing times. Each runner wrote her personal-best time on the right side and her goal on the left. They then tallied up the times and compared them to the results of last year’s state meet to see where the Blazers would have finished.

Finishing 25th in a field of 25 state-qualifying teams was the projected reality. Payton, Jones, Elmwood Park and University — teams which all finished ahead of Trinity at the Chicago U-High Sectional — placed 21 through 24 on Saturday.

“The level of competition is always very competitive and going into that day I told the girls that,” head coach Renee Koziol said. “I think in our division the last 22 places were 18:03. Usually we run against girls around 18 and 19 minutes, but girls who are down at 16 and 17 minutes, that’s pretty impressive and it’s just a honor to run against that type of talent.”

Four of Trinity’s seven runners finished with personal-best times, including sophomore Emily Doyle, who paced the team with a time of 19 minutes, 30 seconds and finished 74th overall. Junior Tatiana Nieves and sophomores Paige Jaffe and Mary Bea Halloran were the other three with PR’s, finishing second, third and fifth for Trinity, respectively. Sophomore Erin Nelson, who along with Doyle competed at the state meet last year as individuals, was the team’s No. 4 runner.

Regardless of where it placed at Detweiller Park in Peoria, this group will always be known as the first in school history to qualify for state as a team. Trinity missed advancing by four points last season and Koziol hopes to continue her program’s progression come next fall.

Trinity has improved every year since she took over as head coach. The Blazers finished 13th at sectionals in her first year and sixth in 2012 before finally making the leap this season. With only one senior graduating — Jacqueline Josephs, who placed seventh for the Blazers — Koziol expects to continue improving as her roster of predominately freshmen and sophomores matures.

This season, Trinity strove for its five scoring runners to finish under 21 minutes. Next year, the team is shooting for 20 minutes.

“We have such a young team and so much more to improve on,” said Nieves, who will be the team’s lone senior next year. “On the bus ride back we talked about what we need to improve on to place better and make it to state next year. As a team, we’re ready to work together and train this summer in order to improve a lot.”