Saturday was rough for Joliet-area football

Call it Black Saturday. Going 0-5 does not sound good, and it’s not. But what is noteworthy is how close that was to 4-1 or even 5-0 — against quality competition. 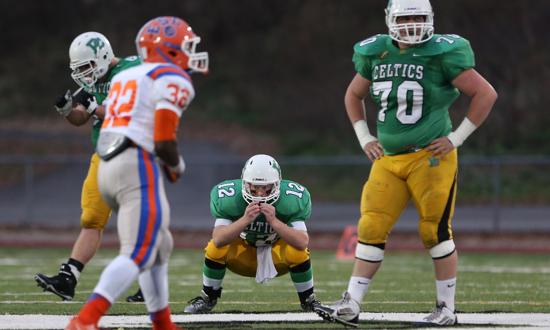 Providence's Justin Hunniford (12) feels the frustration of not converting on fourth down against East St. Louis. | Allen Cunningham/For Sun-Times Media

The Joliet area takes pride in its high school football.

On a yearly basis, our area puts a dozen teams in the playoffs, give or take one or two, and most years one, two or even three earn their way to state championship games.

Of course, there are rare occasions when the state finals will be played Thanksgiving weekend without area representation. This is one of those years because our area went 0-5 in the quarterfinals.

Going 0-5 does not sound good, and it’s not. But what is noteworthy is how close that was to 4-1 or even 5-0 — against quality competition.

You can’t be everywhere at once, and I traveled to Edwardsville for Lincoln-Way East’s Class 7A game. I got in on the Griffins’ heartache.

Edwardsville (12-0) was in command early and led East 13-0 at halftime. However, the Griffins (9-3), who finished second in 7A last season, played an outstanding second half and took a 14-13 lead with 2:04 left on a 97-yard touchdown drive, culminating in Brian Casey’s 1-yard run and Anthony Sciarini’s conversion kick.

Sometimes, however, you have to credit the opponent. East coach Rob Zvonar did that, saying Edwardsville, under coach Matt Martin, should be included with the best teams in the state. The Tigers drove 66 yards to score the decisive touchdown with less than a minute remaining.

Griffins center Nick Allegretti, who is headed to Illinois, agreed to talk afterward.

“It’s upsetting,” he said. “We fell short of our goals and dreams, but I love my brothers, my best friends. They fought until the end.

“We came together in the second half. At halftime, we thought about what this meant to us, and that changed things. Until that last drive, we had it.”

Allegretti collapsed to his haunches and broke down, too teary to continue.

“A lot of people thought they had the incentive, the reason, to say we wouldn’t make a run like we did last year,” wide receiver Austin Winkler said. “I’m really proud of this team, what our guys did.”

Zvonar noted, “Our seniors played 26 games the last two years. They could have played only a couple of more. I can’t say enough about them, how proud I am of them.”

Joliet Catholic (10-2) and Lincoln-Way West (11-1) had similar experiences. The Hilltoppers fell 22-21 to four-time defending state champion Montini (12-0), compliments of a touchdown on a deflected pass and 2-point conversion in the fourth quarter. West led Sycamore 14-7 in the fourth quarter, but the Spartans (12-0) scored twice to win 21-14.

“It was a fun game,” Joliet Catholic wingback Mike Ivlow said of the war at Montini. “Even at the entrance off the bus, I told the guys, no matter what happens you will remember this game forever. It gets no bigger.

“We weren’t expecting that outcome, but if it had been the state title game, I think it would have gone down as one of the best ever. I’m rooting for Montini to win it all now. They’re classy kids. They deserved to win.”

It was a Black Saturday, but these five heartbreakers do not make this a bad year for our area.