John Vislisel and Dan Turpin are the only two returning starters for Harvest Christian, which is coming off a 17-12 season. 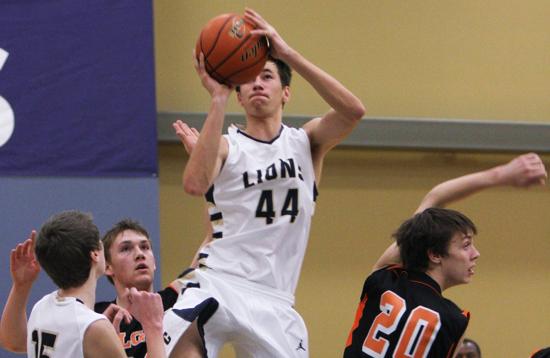 The stars might be aligned for John Vislisel and Dan Turpin to help Harvest Christian raise the bar even higher this season.

As the team’s only two returning starters, the productive big men figure to carry a heavy load as the Lions look to build off a 17-12 campaign that marked the program’s high-water mark for victories.

Vislisel, a 6-7 senior center, led Harvest Christian in scoring last year when he averaged 14.1 points and 6.1 rebounds. Turpin, a 6-6 senior forward, pitched in with 8.2 points and 6.8 rebounds per game.

Those totals could be on the way up as Vislisel and Turpin put their experience in the post to good use. With the IHSA promising to crack down on defenders who impede the path of the ballhandler, second-year Lions coach Jeff Boldog plans on feeding his twin towers early and often.

“This is going to be a big year for John and Dan,” Boldog said. “It’s their second year with me and running our offense, so things are starting to click. With a lot of the rules changes, we’re definitely going to try and take advantage of our height in the post.”

Harvest Christian does have some gaps to fill, especially after losing a projected starter when Kyle Fritz transferred to Crystal Lake Central.

Junior guard Noah Fox is the top returner in the back court after thriving as the team’s sixth man last season. He’ll get plenty of help from freshman guard Riley Steiner, who will come off the bench and help stretch opposing defenses with his shooting range.

Sophomore forward Brett Cramer and junior guard Jake Adams fill out the starting lineup for the Lions, who count Vislisel and Turpin as the only two seniors on the roster.

“We talk about trying to build a tradition,” Boldog said. “Every year the team has been making steps, so we want to continue that. We need to make sure the younger kids see the hard work and get excited about the program because you have to start building from the bottom up.”