Running back Drake Berberet rushed for 146 yards on 24 carries and scored two touchdowns as Rochester held off Geneseo for a 16-8 win in Friday’s Class 4A state championship game. 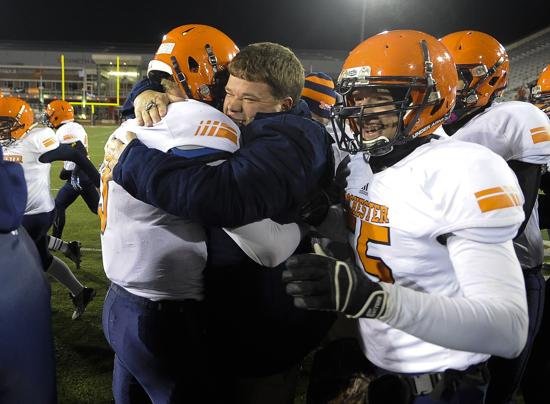 On Friday night, it was mission accomplished.

Running back Drake Berberet rushed for 146 yards on 24 carries and scored two touchdowns as Rochester held off Geneseo for a 16-8 win in Friday’s Illinois Class 4A state championship game.

“That was the one thing we really talked about since day one is we want to be the first public school ever to win four [straight] state championships,” Leonard said after his Rockets (13-1), a team that averaged 42.5 points per game, grinded it out against Geneseo (12-2). “Now we’re at the top of the list, and I think that puts our program in very elite status.”

Down 16-0 in the fourth quarter, Geneseo quarterback Luke Synder connected with Drew Himmelman on a 51-yard pass play that set up first-and-goal on the 2. Rayce Singbush ran in for the score on the next play, and Himmelman’s catch on the two-point conversion cut Rochester’s lead to 16-8 with 5:44 left in the game.

But the Rockets managed to run out the clock.

“It feels great,” said Berberet, who has been on three of the four title-winning teams. “I haven’t lost a playoff game in my whole career. Not many people can say that. It’s an unbelievable feeling.”

Rochester opened scoring, helped by a Geneseo penalty. The Rockets attempted a second-quarter, 35-yard field goal that fell short, but that drive was kept alive when Geneseo was penalized for roughing the kicker. Rochester got the ball on the 9-yard line, and two plays later Berberet ran it in for a touchdown.

Singbush led Geneseo, which managed just 93 yards of offense in the first half, with 66 yards on 15 carries.

“We knew it was going to be a hard fought game coming in, and I’m really proud of the way our kids played,” Geneseo coach Larry Johnsen Jr. said. “We just came up a little short. Rochester did a great job. Credit goes to them for sure.”